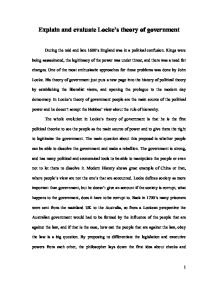 It was allocated with the right to publish the laws, applying sanctions, and to use force of a society for observance of these laws. However, the state should not encroach on these rights, as the limit of its authority at all forms of rule is the natural rights of its citizens. The government cannot incur the right to rule by means of any despotic decrees; on the contrary, it is obliged to create justice and to define the rights of citizens by means of declaration of constant laws and representatives on that judges. Locke considered that the government itself should obey to the laws established in a society; otherwise citizens have the full right to return to their initial rights and to transfer them to a new authority, and people should be judges when the government disobeys the set rules (Locke J., Two Treatise of Government, Yale University Press, p. 207). Locke emphasizes, that the person is not born as a citizen of one or the other state. The person chooses under what authority of the government, which citizen of the state it wishes to become, 'Every man being, as has been showed, naturally free, and nothing being able to put ...read more.

All these powers are precisely defined and adjusted by laws, strictly supervised by parliament. Locke also acknowledges the federative, which is responsible for representing the commonwealth in foreign countries. Locke's theory of knowledge and social philosophy has rendered deep influence on history of culture and a society, in particular on development of the American constitution. He is considered as the founder of the liberalist views, and the basic theorists of a democratic state system. His ideal is English constitutional monarchy, in which there is balance of interests of the person, and the government. Locke does a great job by putting the people over the government, and making them the creators of the latter. The way in which people can disobey the rules is still a question, but their right to revolt is absolutely justified, from the author's perspective. By making the society be more important than the government in his theory, Locke actually writes one of the first amendments of the constitution stating that the Supreme power is the people and all the power belongs to it. Formation of the checks and balances through differentiating the executive and legislative power just proves how crucial it is in modern world, where every country tries to maintain the balance. ...read more.