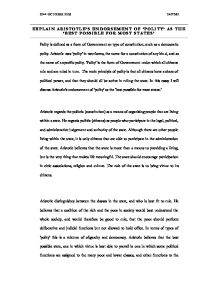 EXPLAIN ARISTOTLE'S ENDORSEMENT OF 'POLITY' AS THE 'BEST POSSIBLE FOR MOST STATES' Polity is defined as a from of Government or type of constitution, such as a democratic polity. Aristotle uses 'polity' in two forms, the name for a constitution of any kind, and as the name of a specific polity. 'Polity' is the form of Government under which all citizens rule and are ruled in turn. The main principle of polity is that all citizens have a share of political power, and that they should all be active in ruling the state. In this essay I will discuss Aristotle's endorsement of 'polity' as the 'best possible for most states.' Aristotle regards the politeia (constitution) as a means of organising people that are living within a state. He regards polit�s (citizens) as people who participate in the legal, political, and administrative judgement and authority of the state. Although there are other people living within the state, it is only citizens that are able to participate in the administration of the state. ...read more.

In book III he discusses Kingship as a form of Government, he concludes that it is not a good form of Government unless one citizen's virtues are greater than the rest of the state's combined. As this is very unlikely to be the case, he believes his polity is more appropriate. He describes his polity as a form of Government in which all citizens take turn to rule. There are many different sections to the Government, and as discussed above each class of the state has a role to play in each section. It is in this way that citizens from each class take turn to rule. Aristotle's polity incorporates both oligarchic and democratic features in the aim of uniting the rich and the poor. He makes the distinction that the difference between oligarchy and democracy is the difference between whether the rich and the poor rule, not whether the few or the many rule. Although it is almost certain that rich will be few and the poor will be many. ...read more.

These forms of constitution are simply the corrupted forms of what he believes are the good constitutions. In book III Aristotle argues a principle that is the corner stone of Liberal Democracy, that we ought, to the extent possible, allow the law to rule. What he mean by this is that people by allowing law to rule, people are leaving god and intellect to rule. If they are asking man to rule then they are opening up the possibility of corruption. Aristotle believes that Polity is the best constitution for achieving the common good; by the common good he means the well being of all citizens within the state, this does not mean all residents within the state. Other residents of the state, such as women, manual labourers and slaves are in the state for the good of the citizens and are not taken into consideration. Aristotle does not claim that Polity is the ideal form of constitution, he believed it was best because by the citizens sharing the power, they were all represented in Government and this meant that there was less chance of corruption. Polity is a form of constitution that is realistically attainable by most states. ...read more.