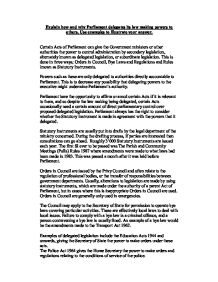 Explain how and why Parliament delegates its law making powers to others. Use examples to illustrate your answer.

Explain how and why Parliament delegates its law making powers to others. Use examples to illustrate your answer. Certain Acts of Parliament can give the Government ministers or other authorities the power to control administration by secondary legislation, alternately known as delegated legislation, or subordinate legislation. This is done in three ways; Orders in Council, Bye Laws and Regulations and Rules known as Statutory Instruments. Powers such as these are only delegated to authorities directly accountable to Parliament. This is to decrease any possibility that delegating powers to the executive might undermine Parliament's authority. Parliament have the opportunity to affirm or annul certain Acts if it is relevant to them, and so despite the law making being delegated, certain Acts occasionally need a certain amount of direct parliamentary control over proposed delegated legislation. Parliament always has the right to consider whether the Statutory Instrument is made in agreement with the powers that it delegated. ...read more.

The Council may apply to the Secretary of State for permission to operate bye laws covering particular activities. These are effectively local laws to deal with local issues. Failure to comply with a bye law is a criminal offence, and a person contravening a bye law is usually fined. An example of a bye law would be the amendments made to the Transport Act 1962. Examples of delegated legislation include the Education Acts 1944 and onwards, giving the Secretary of State the power to make orders under these acts. The Police Act 1964 gives the Home Secretary the power to make orders and regulations relating to the conditions of service of the police. The Road Traffic Act 1983 enables the Minister for Transport to make regulations regarding matters concerning road traffic. This is done by using Statutory Instruments. ...read more.

The sub-delegation of powers is another problem because it has the ability to cause complexity and confusion, which could prove to be extremely damaging if a mistake was to be made. This does not apply for EU statutory instruments. Parliament itself has a huge amount of laws to be passed, and this can lead to confusion and complexity within Parliament. Parliament passes most of its laws down for delegated legislation, and so the sheer volume of information and new ideas passed down are impossible for anyone to keep abreast of in such a short space of time. The final problem is that it is undemocratic. This is because a civil servant makes most of the regulations or other unelected people, except for local authority bye laws made by elected councillors. Henry VII clauses can give power to delegated legislation or amend or repeal Acts of Parliament ...read more.