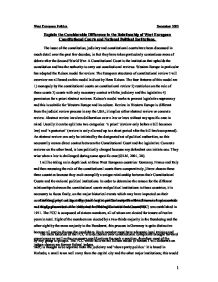 Explain the Considerable Difference in the Relationship of West European Constitutional Courts and National Political Institutions.

West European Politics December 2002 Explain the Considerable Difference in the Relationship of West European Constitutional Courts and National Political Institutions. The issue of the constitution, judiciary and constitutional courts have been discussed in much detail over the past few decades; in fact they have taken particularly contentious areas of debate after the Second World War. A Constitutional Court is the institution that upholds the constitution and has the authority to carry out constitutional reviews. Western Europe in particular has adopted the Kelsen model for review. The European structures of constitutional review I will overview are all based on this model laid out by Hans Kelsen. The four features of this model are 1) monopoly by the constitutional courts on constitutional review 2) restriction on the role of these courts 3) courts with only necessary contact with the judiciary and the legislative 4) permission for a priori abstract reviews. Kelsen's model works to prevent legislative supremacy and this is suitable for Western Europe and its culture. Review in Western Europe is different from the judicial review process in say the USA; it implies either abstract review or concrete review. Abstract review involves deliberation over a law or laws without any specific case in mind. Usually it can be split into two categories: 'a priori' (review only before a bill becomes law) ...read more.

In reality this means the majority of the judges are former Parliamentarians. As in Italy, judicial review is banned in France; once a bill is passed its constitutionality cannot be questioned. Therefore concrete review is not allowed, a priori abstract review however is when either the President of the Senate/National Assembly or when sixty or more senators/deputies refer something. Germany, Italy and France each have a court therefore, which will produce different relationships with political institutions in their respective nations. Stone Sweet explains the cultural and historical reason for these differences: "In Europe...a deep hostility towards judges has reigned over for most of the last two centuries, the delegation of powers to judiciaries has been viewed as a necessary evil" (Stone Sweet, WEP Jan 2001, 78). The notion of parliamentary supremacy was regarded as being more essential because in a democracy this is the bastion of popular sovereignty and general will. This was especially a strong sentiment in France. The state has always been unitary and not federal like Germany or regional like Italy, there is also history of weak local government. A need for a Constitutional council was not marketed because the government felt it needed a check and balance procedure in place. Conversely, the Council was intended for quite the opposite reason: "The Gaullists replaced the British-style parliamentary system with a mixed presidential-parliamentary one, strengthening the executive," (Stone Sweet, WEP, 85). ...read more.

Also their forms of abstract and concrete review has made the FCC a more diverse and significant institution. "In Western Europe parliamentary regimes, focus is typically on political parties and the ties and tensions they present between the Parliament and the executive ... these theories assume that the crucial actions in parliamentary systems occur on a continuum running from legislative to executive, but that view ignores a broader set of relationships among Parliament, the executive and the Constitutional Court" [Volcansek, EJPR 2001, 348]. Now I have compared the roles of the Constitutional Courts in Germany, France and Italy, and viewed their relationships with the major political institutions in their respective countries. After the Second World War, the importance of having a strong constitution was emphasised throughout Western Europe. And in particular the need for a separate constitutional body to check the executive branch was deemed essential in those countries transitioning to liberal democracies. This is why the FCC in Germany and the ICC in Italy have a greater duty to uphold the value of the Constitution in their nations. The cultural perspective, as well as the historical one, helps to explain why each of the countries has chosen to adopt slightly different versions of the Kelsen model. Emergence of the Constitutional Courts throughout Western Europe has impacted on the role of the executive and the legislative. Their powers have been limited in some cases and in other cases law-making policies have been given much more thought and consideration. ...read more.