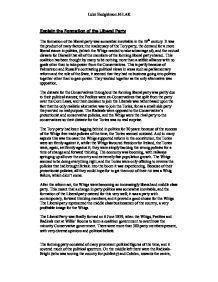 Explain the Formation of the Liberal Party

Explain the Formation of the Liberal Party The formation of the liberal party was somewhat inevitable in the 19th century. It was the product of many factors; the inadequacy of the Tory party, the demand for a more liberal stance in politics, (which the Whigs needed to take advantage of), and the mutual distaste for Disraeli that all of the members of the forming liberal party shared.. This coalition has been thought by many to be nothing more than a selfish alliance with no goals other than to take power from the Conservatives. This is partly because of Palmerston and Russell's contrasting political views in areas such as parliamentary reform and the role of the State, it seemed that they had no business going into politics together other than to gain power. They worked together as the only alternative was opposition. The distaste for the Conservatives throughout the forming liberal party was partly due to their political stances; the Peelites were ex-Conservatives that split from the party over the Corn Laws, and their decision to join ...read more.

The Whigs seemed to be doing everything right, and the Tories were only offering to reverse the policies that had brought Britain into the boom it was experiencing. Because of their protectionist policies, all they could hope for to get them out of their rut was a Whig failure, which didn't come. After the reform act, the Whigs were becoming an increasingly liberal and middle class party. This meant that a change in party politics was somewhat inevitable, and the formation of the Liberal party catered for this very well; it was a party with contemporary, forward thinking members, and it proved a good choice for the Whigs. The Liberal party represented the middle class businessmen of the country, a very profitable image for the Whigs. The Liberal Party was finally formed on 6 June 1859, when the Whigs, Peelites and Radicals met at Willis' Rooms to form a coalition government to overthrow the minority Conservative government. ...read more.

They had the vote of the "urban peasant", and the growing number of moderately educated lower classes. The newspaper played a large part in the rise of liberalism, with newspapers widely and cheaply available through the new expansion of railroads throughout the country; liberal ideas were being spread very rapidly. And further more, the newspapers were cheap enough for the working classes to read daily; it was partly this reason that helped the liberals win the borough voters, although the cosmopolitan attitude was already relatively liberal, so the boroughs didn't need much persuasion. They won the first election to take place after their coalition (1868) very comfortably. All in all the Liberal party was formed because the prospective members wanted to unite to defeat the minority conservative party. they were, in general, far too competent to sit back in parliament as separate minority parties when they could take advantage of their mutual desire to take power, even if it meant putting contrasting political opinions aside. Luke Hodgkinson J6 LAK ...read more.