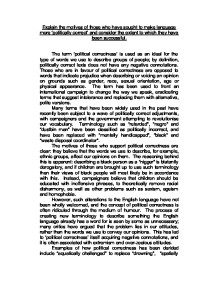 Explain the motives of those who have sought to make language more 'politically correct' and consider the extent to which they have been successful.

Explain the motives of those who have sought to make language more 'politically correct' and consider the extent to which they have been successful. The term 'political correctness' is used as an ideal for the type of words we use to describe groups of people; by definition, politically correct lexis does not have any negative connotations. Those who are in favour of political correctness are opposed to words that indicate prejudice when describing or voicing an opinion on grounds such as gender, race, sexual orientation, age or physical appearance. The term has been used to front an international campaign to change the way we speak, eradicating terms that suggest intolerance and replacing them with alternative, polite versions. ...read more.

Instead, campaigners believe that children should be educated with inoffensive phrases, to theoretically remove racial disharmony, as well as other problems such as sexism, ageism and homophobia. However, such alterations to the English language have not been wholly welcomed, and the concept of political correctness is often ridiculed through the medium of humour. The process of creating new terminology to describe something the English language already has a word for is seen by some as unnecessary; many critics have argued that the problem lies in our attitudes, rather than the words we use to convey our opinions. This has led to 'political correctness' itself acquiring negative connotations, and it is often associated with extremism and over-zealous attitudes. Examples of how political correctness has been derided include "aquatically challenged" to replace "drowning", "spatially perplexed" to replace "drunk", and even "provider of distributive, monetarily valued fornication" to replace "prostitute". ...read more.

Opponents of political correctness argue that this method of attempting to control the way we communicate and express our ideas is actually a form of dictatorial censorship, and consequently prevents individuals from conveying their own personal views on a subject. Another strong argument against political correctness is that language is simply a reflection of social attitudes, and if this stance does not change then the new, 'positive' lexis will soon acquire the same negative connotations the previous words implied. The outcome is that instead of using taboo words such as "slut" or "spastic", the new lexis to describe such people will have pragmatic meanings that continue to imply a derogatory view. As Ann Robinson, Chief Executive of SCOPE (formerly The Spastics Society, but renamed to become more politically correct) stated, "Words make a difference but what is more important is the work ahead to end discrimination." ...read more.