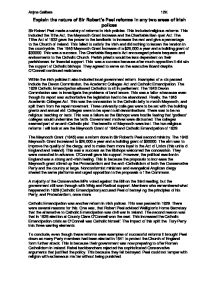 Explain the nature of Sir Robert's Peel reforms in any two areas of Irish polices.

Explain the nature of Sir Robert's Peel reforms in any two areas of Irish polices Sir Robert Peel made a variety of reforms in Irish policies. This included religious reforms. This included the Tithe Act, the Maynooth Grant increase and the Charitable Banquet Act. The Tithe Act of 1832 gave the power to the landlords to increase the rent and give a percentage to the Church of Ireland. This failed to satisfy the Irish and did nothing to lessen the tension in the countryside. The 1845 Maynooth Grant increased to $26,000 a year and a building grant of $30000. This was a success. The Charitable Bequests Act encouraged private bequests and endowments to the Catholic Church. ...read more.

There was to be no religious teaching or tests. This was a failure as the Bishops were hostile fearing that 'godless' colleges would undermine the faith. Government motives were distrusted. The colleges seemed part of an anti-Catholic plot. The benefits of Maynooth were lost. The two religious reforms I will look at are the Maynooth Grant of 1845 and Catholic Emancipation of 1829. The Maynooth Grant (1845) was a reform done in Sir Robert's Peel second ministry. The 1845 Maynooth Grant increased to $26,000 a year and a building grant of $30000. The aim was to improve the quality of the clergy, and to make them more loyal to the Act of Union (this united England and Ireland). This was a success as the Bishops welcomed the concession. They were consulted in advance. ...read more.

This was passed in 1829. There were several reasons for this. One was, that Robert Peel advised Welligton's Home Secretary that the alternative to Catholic Emancipation was civil war in Ireland. The second reason was that in 1828 election at County Clare O'Connell won the seat. This increased the Catholic Emancipation crisis as O'Connell was Catholic himself. The impact of this split the Tory Party into three warring elements. To conclude, even though these reforms were examples of successful reforms it brought Peel down as many Party members had been elected in 1841 to protect the Church of England form further attack. This is because their government was now preparing to offer Roman Catholicism in Ireland. Rebel backbenchers rejected the sophisticated Conservative arguments that justified the policy. This because they felt betrayed. Peel could not temper with religion with extraneous matter without being punished. Anjna Galliara 12K ...read more.