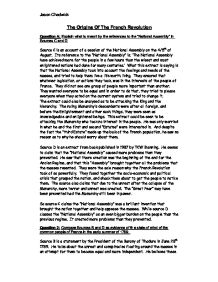 Explain what is meant by the references to the &quot;National Assembly&quot; in Sources C and D.

The Origins Of The French Revolution Question A: Explain what is meant by the references to the "National Assembly" in Sources C and D Source C is an account of a session of the National Assembly on the 4/5th of August. Its reference to the "National Assembly" is; 'The National Assembly have achieved more for the people in a few hours than the wisest and most enlightened nations had done for many centuries.' What this extract is saying is that the National Assembly took into account the feelings and needs of the masses, and tried to help them live a life worth living. They ensured that whatever legislation, or actions they took, was in the interests of the people of France. They did not see one group of people more important than another. They wanted everyone to be equal and in order to do that, they tried to please everyone when they acted on the current system and tried to change it. The extract could also be analysed as to be attacking the King and the hierarchy. The ruling Monarchy's descendants were after all foreign, and before the Enlightenment and other such things, they were seen as knowledgeable and enlightened beings. This extract could be seen to be attacking the Monarchy who took no interest in the people. He was only worried in what he and the first and second "Estates" were interested in. ...read more.

But rather than due to the equality and independence every man wants, the source claims the problem was the lack of food and work. The current socio-economic crisis which affected France was to blame for the high temperature between the people. This led to urban and rural violence increasing dramatically. With it reaching a climax in July1789 with the Fall of the Bastille in Paris, and the "Great Fear" in the countryside. With such high temperatures, the people fused together all the problems (political, financial and socio-economic) and up rose to try and get these problems sorted. But the main reason they were so uneasy was the lack of food and work. Question 3: "The French Revolution of 1789 was, first, and foremost, a political event, inspired by widespread desire for liberty and equality". What do you think of this interpretation using all the Sources and your own knowledge? Source A is in itself a conflict of the ideal that the revolution occurred because of the want for liberty and equality, but also because of the problems the Government was facing. "They are on the eve of some great revolution in the Government: that everything points to it: the confusion in the finances." This extract is saying that all political signs are pointing to unrest and uprisings in the people caused by mis-management of finances and other such Governmental duties. ...read more.

This in itself increased the unrest of the people, other the representation of the "Third Estate". But also the idea that the political, financial and socio-economic problems were out of control meant that the people became disillusioned with the Government and the current Regime. It wanted change, and they believed the only way to get change was forcefully. Therefore they forcefully brought down the established regime and brought about their own ideals. From my own knowledge I believe that the Revolution was mainly caused by the socio-economic problems faced by the peasants and the masses. With many failed harvests and rising bread prices, the bulk of France struggled to make a living and feed the family. Also with tithe, seigneurial dues and direct/in-direct taxes rising, people found it harder and harder to scrounge even a measly living. But I do believe that since the American Revolution there was gradually more and more want for change in the way the Government ran the country and its political and financial systems. In summation of all I have found, both from my own knowledge and the sources, I conclude that, although the want for liberty and equality was high, it was not the only reason for the 1789 Revolution. Governmental problems and rising living costs provoked the people into taking action against the Government. And I believe they saw the only way of getting heard was to forcefully implement their ideas on the Government. ?? ?? ?? ?? Jason Chadwick ...read more.