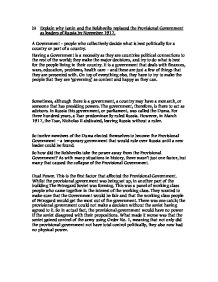 Explain why Lenin and the Bolsheviks replaced the Provisional Government as leaders of Russia by November 1917.

b) Explain why Lenin and the Bolsheviks replaced the Provisional Government as leaders of Russia by November 1917. A Government - people who collectively decide what is best politically for a country or part of a country. Having a Government is a necessity as they are countries political connections to the rest of the world; they make the major decisions, and try to do what is best for the people living in their country. It is a government that deals with finances, wars, education, problems, health care - and these are just a few of things that they are presented with. On top of everything else, they have to try to make the people that they are 'governing' as content and happy as they can. Sometimes, although there is a government, a country may have a monarch, or someone that has presiding powers. The government, therefore, is there to act as advisors. In Russia this government, or parliament, was called the Duma. For three hundred years, a Tsar predominantly ruled Russia. However, in March 1917, the Tsar, Nicholas II abdicated, leaving Russia without a ruler. So twelve members of the Duma elected themselves to become the Provisional Government - a temporary government that would rule over Russia until a new leader could be found. ...read more.

Life was tough - there was little food or fuel, the war had consumed all of the countries' resources, and on top of all of this, soldiers were leaving the army. Everyone realized that the war had to end. However, it wasn't all as simple as this. In order to keep France and Britain on Russias' side, Russia could not surrender as they had been lent money that would be jeopardized if they decided to surrender. So the war had to continue. This made the Provisional Government increasingly unpopular - workers went on strike and almost refused to obey anything that the Government told them to do. In their eyes they had complete freedom. This was really bad for the Government, but good for Lenin and the Bolsheviks as conditions in Russia deteriorated daily, weakening the people and the government. The majority of people in Russia had already put the blame onto the government, and so needed someone to turn to; someone that would make everything better for them, Lenin was this person. He used all of the sufferings in Russia as part of his campaign, promising them better lives. ...read more.