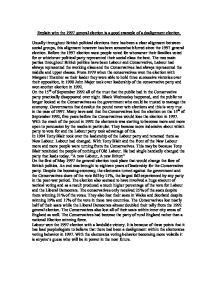 Explain why the 1997 general election is a good example of a dealignment election. Usually throughout British political elections there has been a clear alignment between social groups

Explain why the 1997 general election is a good example of a dealignment election. Usually throughout British political elections there has been a clear alignment between social groups, this alignment however has been somewhat blurred since the 1997 general election. Before the 1997 election most people voted for whomever their families voted for or whichever political party represented their social class the best. The two main parties throughout British politics have been Labour and Conservative, Labour had always represented the working class and the Conservatives had always represented the middle and upper classes. From 1979 when the conservatives won the election with Margaret Thatcher as their leader they were able to hold three successive victories over their opposition, in 1990 John Major took over leadership of the conservative party and won another election in 1992. ...read more.

With the crash of the pound in 1992 the electorate was starting to become more and more open to persuasion by the media in particular. They became more indecisive about which party to vote for and the Labour party took advantage of this. In 1994 Tony Blair took over the leadership of the Labour party and renamed them as New Labour. Labour had changed. With Tony Blair and the front of the New Labour more and more people were turning from the Conservatives. This may be because Tony Blair reminded the people of nothing of Old Labour. He had single handedly changed the party that leads today. "A new Labour, A new Briton" On the first of May 1997 the general election took place that would change the face of British politics. ...read more.

The conservatives only received 25% of the seats despite them winning 31% of the votes. They also lost their seats in Wales and Scotland despite winning 19% and 17% of the vote in these two countries. The Conservatives lost nearly half of their seats while the Liberal Democrats almost doubled their tally from the 1992 general election. The Conservatives also lost all of their seats within inner city areas of England as well. The Conservatives had become the party of rural England rather than a national Election winning force. Labour won the 1997 election with a landslide victory. It is because of these points that it has lead psephologists to believe that there had been a dealignment within the electorates voting behavior in 1997. With the electorates voting behavior becoming more volatile it is anyone's guess who will be in power in the near future. ...read more.