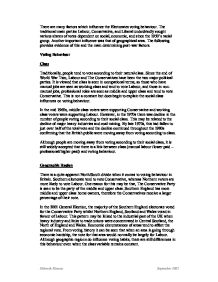 There are many factors which influence the Electorates voting behaviour. The traditional main parties Labour, Conservative, and Liberal undoubtedly sought various shares of votes dependent on social, economic, and since the 1950's racial group. Another important influence was that of geographical area. The following provides evidence of this and the main determining post-war factors. Voting Behaviour Class Traditionally, people tend to vote according to their natural class. Since the end of World War Two, Labour and The Conservatives have been the two major political parties. It is viewed that class is seen in occupational terms, so those who have manual jobs are seen as working class and tend to vote Labour, and those in non-manual jobs, professional roles are seen as middle and upper class and tend to vote Conservative. This is not a constant but does begin to explain the social class influences on voting behaviour. In the mid 1960s, middle class voters were supporting Conservative and working class voters were supporting Labour. However, in the 1970s there was decline in the number of people voting according to their social class. ...read more.

Economic circumstances of areas tend to affect the regional vote. From voting history it can be seen that when an area is going through economic hardship, the vote for that area would normally be largely for Labour. Although geographic regions do influence voting habits, there are still differences in this behaviour even when the class variable remains constant. Age Age is a contributing factor to the way in which people vote. It is usual that older people tend to vote Conservative, whereas younger people more often vote Labour. This is especially true of first time voters who normally give a large percentage of their vote to Labour. The writer G.B. Shaw once wrote that 'If you are not a socialist by the time you are 25, you have no heart. If you are not a Conservative by the time you are 35, you have no head'. Albeit in the 2005 General Election there was a large decline in young peoples' votes, this election proved that no party should take the vote of younger voters for granted, as there was an increase in young peoples' votes to the Liberal Democrats, this is said to be due to issues surrounding the Iraq War. ...read more.

Race Most black and Asian people tend to vote Labour. Figures from a study by Fitzgerald in 1988 show that, in the 1987 General Election, this was likely to be due to these voters viewing themselves as being 'working class', and Labour was viewed as the 'working class' party. This study also showed that, in the 1987 General Election the Conservative Party received more votes from East African Asians than from those from the Indian Sub-Continent. A report by Saggar in 1997 suggests that, Labour have a more liberal policy on issues of race and immigration than The Conservative Party, therefore this would contribute to The Labour Party receiving a higher percentage of votes from black and Asian people. In conclusion the entire social make-up of Great Britain and a greater public/electoral awareness of the main and minor political parties has changed and diversified. This coupled with a greater appetite for parties to challenge 'safe seats' has allowed for a merging of all the above factors. It is true that Bentley identified the major influential groups of the post-war to 1990's however it is clear that information availability and the individuals desire to seek more from their 'government' has brought about major 'competition' to all political parties. ?? ?? ?? ?? Deborah Keenan September 2005 ...read more.