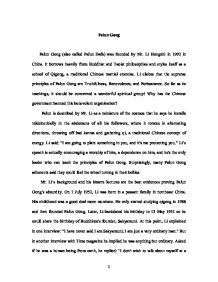 Falun Gong Falun Gong (also called Falun Dafa) was founded by Mr. Li Hongzhi in 1992 in China. It borrows heavily from Buddhist and Taoist philosophies and styles itself as a school of Qigong, a traditional Chinese martial exercise. Li claims that the supreme principles of Falun Gong are Truthfulness, Benevolence, and Forbearance. So far as its teachings, it should be concerned a wonderful spiritual group! Why has the Chinese government banned this benevolent organization? Falun is described by Mr. Li as a miniature of the cosmos that he says he installs telekinetically in the abdomens of all his followers, where it rotates in alternating directions, throwing off bad karma and gathering qi, a traditional Chinese concept of energy. Li said: "I am going to plant something in you, and it's me protecting you." Li's speech is actually encouraging a worship of him, a dependence on him, and he's the only leader who can teach the principles of Falun Gong. Surprisingly, many Falun Gong adherents said they could feel the wheel turning in their bellies. Mr. Li's background and his bizarre lectures are the best evidences proving Falun Gong's absurdity. On 7 July 1952, Li was born in a peasant family in northeast China. ...read more.

April 25, 1999: More than 10,000 followers of Falun Gong sit down around the Chinese Communist Party headquarters in Beijing for an entire day, demanding the right to practice their meditation and breathing exercises. It was the largest demonstration in the capital since 1989, when democracy protestors were massacred on Tian'an Men Square. May 3: Li Hongzhi, the sect's US-based guru, calls on Beijing to start dialogue with the movement which claims it has 80 million followers in China (two million according to the authorities). May 11, 2000: About 200 members protest in Tian'an Men Square to mark their founder's birthday and are detained by police, etc. June 23 to 30, 2002: Falun Gong hijacked the government's Sinosat-1 satellite disrupted TV transmissions and scratched plans for a live broadcast of a speech by President Jiang Zemin. It was the latest act of defiance by the group. Up to now, more than 1600 people died due to Falun Gong. Some lower educated Falun Gong followers were obsessed to commit suicide, murder pagans and innocent people even. Lots of incredible tragedies have taken place. Here are two bloody events. On January 23, 2000, Liu Siying, the 12-year-old girl and several other Falun Gong followers set themselves on fire in Tian'anmen Square died at a hospital in Beijing. ...read more.

Mayor's press secretary said such letters are routine, he don't think the mayor is very aware of the details of Falun Gong except what he's seen in press accounts of what's happening in China. In January, 4 members of Congress joined 41 other lawmakers in signing a letter that getting Li nominated for a Nobel Peace Prize. What a nonsensical nomination! In my mind, China Threat theory is the cause of this phenomenon. The political view accepted by most of American Government officials and mainstream society. If you search "China threat" in yahoo search engine, you can find numerous relative news and articles. I think that "China Threat" theory fabricated by those Americans is totally groundless. Fundamental reason for those Americans concocting the "China threat" theory lies in their Cold War mentality, these people rack their brains to seek and make enemies to cover up and find a pretext for reaping staggering profits through arms expansion and sales of weapons. Their purpose is to curb China's development, provoke antagonism between China and the United States. The slapstick comedy is going on and on. I believe that the reality will eventually defeat the appearance before long. We should fight with anti--science and use scientific facts to beat this liar's nonsense. The truth will come out finally, but it might be too late for those Falun Gong victims. Reference URL: 1. http://www.falundafa.org 2. http://www.xys.org 1 ...read more.