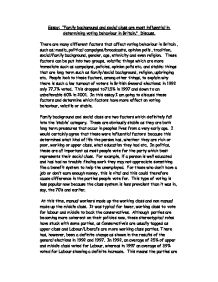 &quot;Family background and social class are most influential in determining voting behaviour in Britain.&quot; Discuss.

Essay: "Family background and social class are most influential in determining voting behaviour in Britain." Discuss. There are many different factors that affect voting behaviour in Britain, such as; media, political campaigns/broadcasts, opinion polls, tradition, social/family background, gender, age, ethnicity and even religion. These factors can be put into two groups, volatile; things which are more immediate such as campaigns, policies, opinion polls etc. and stable; things that are long term such as family/social background, religion, upbringing etc. People look to these factors, among other things, to explain why there is such a low turnout of voters in British General elections; in 1992 only 77.7% voted. This dropped to71.5% in 1997 and down to an unbelievable 60% in 2001. In this essay I am going to discuss these factors and determine which factors have more effect on voting behaviour, volatile or stable. Family background and social class are two factors which definitely fall into the 'stable' category. These are obviously stable as they are both long term pressures that occur in peoples lives from a very early age. I would certainly agree that these were influential factors because this determines what kind of life the person has, whether they are rich or poor, working or upper class, what education they had etc. ...read more.

Ethnic minorities such as refugees may prefer the policies of a party who has helped them, e.g. Labour has been very accommodating to refugees and has given them houses and benefits. The results of the 1997 election showed that 81% of black and Asian voters voted for Labour. In this election, 98% of black and Asian voters, voted showing that they also appreciate the right to vote more as the turnout of general elections for the whole country is sometimes only 60%. Gender might have been a factor when things were less equal between men and woman but this is a rare occurrence now as all parties usually cater for both men and women equally. I think that politics is a basically male-fronted filed but if there was a party run by women they would be supported by some women just because they are women. The issues I have discussed so far are mainly stable reasons but there is also volatile or 'short term' reasons which can explain voting behaviour in Britain. Some people may have been recently influenced by the actions of one party. For example Tony Blair took Britain to war against Iraq which some people who support Labour might have thought was pointless and these people may have decided to vote for another party. ...read more.

Small scale, this does not seem like much of a problem, but if the whole country is affected by the same principles then the vote could be entirely inaccurate. Exit polls are much more effective than the polls taken prior to the election and do not disrupt voting patterns so seriously. A by-product of opinion polls is tactical voting. Tactical voting is where the voter does not vote for their own party, but votes for the party closest in opposition to their worst party. For example if the Conservatives were winning, followed by Labour but the Liberal Democrats had no chance of catching them up, then a Liberal Democrat supporter might vote for Labour to prevent the Conservatives from getting into power. The Labour and the Liberal parties are quite cohesive on their policies. In the 1997 and 2001 elections this was seen as a very helpful boost for Labour as many Liberal supporters voted for Labour in order to keep the Conservatives out. In conclusion to this, I would say that both volatile and stable have an equal, but different effect on voting behaviour in Britain. Stable influences can cause patterns in voting and can help the voter to pick a favourite party, generally. Volatile factors cause more fickle changes of the mind and give more unpredictable results. ...read more.