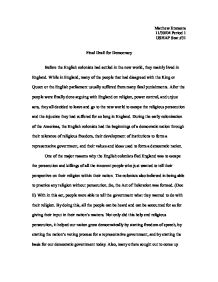 Matthew Emmons 11/30/04 Period 1 USHAP Seat #31 Final Draft for Democracy Before the English colonists had settled in the new world, they mainly lived in England. While in England, many of the people that had disagreed with the King or Queen or the English parliament usually suffered from many fatal punishments. After the people were finally done arguing with England on religion, power control, and unjust acts, they all decided to leave and go to the new world to escape the religious persecution and the injustice they had suffered for so long in England. During the early colonization of the Americas, the English colonists had the beginnings of a democratic nation through their tolerance of religious freedom, their development of institutions to form a representative government, and their values and ideas used to form a democratic nation. One of the major reasons why the English colonists fled England was to escape the persecution and killings of all the innocent people who just wanted to tell their perspective on their religion within their nation. The colonists also believed in being able to practice any religion without persecution. ...read more.

This is a good start for their self-government because they are going to represent themselves by making their own laws and doing the best they can so they can achieve the most benefits. One of the laws that they had, was to elect the officials that would speak on the behalf of the people in their town meetings allowing all the peoples' issues to be heard and discussed by all. The Fundamental Orders also help bring about he House of Burgesses. (Doc C) With in the House of Burgesses, the citizens would be able to elect people to discuss the issues concerning the town and its people. While doing this, the people were able to put all of their input into the issues that concern all of the townspeople. Even at the beginning of the colonization, the Mayflower Compact started the self-governing of all those who settled in he Mayflower's territory. (Doc B) They established early what laws and regulations that were going to help organize and control the colony. They all had the chance to have their beliefs and rights heard and used in the Mayflower Compact. ...read more.

But, where did all these ideas come from. John Locke proposed all of these ideas back during the Enlightenment with his Social contract. It stated that the people had the right to rebel and go against the teachings of the person in power and replace him with some one who will listen to the peoples' needs. Locke's Social contract is the basis of our democratic society today, and it also added many equal rights and voting privileges to all people so they can fairly elect the leaders that will support their issues. So, through religious freedom, a representative government, and the use of democratic values and enlightenment philosophies, our government and nation was able to be shaped in a way to benefit the people, the true democracy. Our government is composed a great deal by Locke's social contract. With his national rights and enlightenment philosophies, we were able to create our Declaration of Independence, a Bill of Rights, and a House of Representatives. All of these events came to pass do to the democratic upbringing given to us in the early colonization of the Americas. Without Locke and all of the democratic events and hardships that our nation went through during the early colonization, the nation that we live in today would not be the same. ...read more.