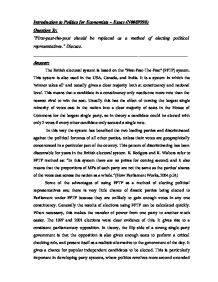 'First-past-the-post should be replaced as a method of electing political representatives.' Discuss.

Introduction to Politics for Economists - Essay (N0089998) Question 3): "First-past-the-post should be replaced as a method of electing political representatives." Discuss. __________________________________________________________________ Answer: The British electoral system is based on the "First-Past-The-Post" (FPTP) system. This system is also used in the USA, Canada, and India. It is a system in which the 'winner takes all' and usually gives a clear majority both at constituency and national level. This means that a candidate in a constituency only needs one more vote than the nearest rival to win the seat. Usually this has the effect of turning the largest single minority of votes cast in the nation into a clear majority of seats in the House of Commons for the largest single party, so in theory a candidate could be elected with only 2 votes if every other candidate only secured a single vote. In this way the system has benefited the two leading parties and discriminated against the political fortunes of all other parties, unless their votes are geographically concentrated in a particular part of the country. This pattern of discriminating has been discernable for years in the British electoral system. R. Rodgers and R. Walters refer to FPTP method as: "In this system there are no prizes for coming second; and it also means that the proportions of MPs of each party are not the same as the parties' shares of the votes cast across the nation as a whole."(How Parliament Works, 2004 p.24) ...read more.

With less public confusion the result will reflect the public opinion, making it fair. With this simplicity in the system there is also a drawback which is that there is a lack of choice given to the voters. The candidates are selected by a small number of party members, and voters can also choose between parties. If the candidate selected for your party has views which you disagree with, you are left no alternative choice within that party. Simple plurality voting is usually linked with single-member constituencies, although Japan is an important exception. Ian Budge, Ivor Crewe, David Mckay and Ken Newton state that: "The simple plurality system unfairly penalises minority parties, including large minority parties such as the liberal democrats, which have widespread rather than concentrated support."(The New British Politics, 2001 p.331) It allows voters to choose between people, rather than just between parties. At the same time, voters can assess the performance of individual candidates, rather than just having to accept a list of candidates presented by a party, as can happen under some List PR electoral systems. Finally, FPTP systems are particularly praised for being simple to use and understand. A valid vote requires only one mark beside the name or symbol of one candidate and the number of candidates on the ballot paper is usually small, making the count easy to administer for electoral officials. ...read more.

Another disadvantage of FPTP can occur in marginal constituencies, where voters tend to change their party loyalty from election to election, and among 'floating' or 'swing' voters, who have no firm party loyalty. The outcome of an election can be decided on the voting patterns in these situations, even although the constituents may number only a tiny proportion of the electorate. In my opinion FPTP system works well, pointing out that it has led to a stable governments based on parliamentary majorities of one party rather than coalition, which can be powerless and ineffective. Single party government is said to mean strong, accountable, and responsive government. However by a 'strong' government it can mean government can force through unpopular legislation such as the poll tax, and then perhaps a 'powerless' government would have to listen to the views and opinions of others, which would be no bad thing. FPTP is capable of creating governments which behave like elective dictatorships, but which do soon a minority of the popular vote. I would argue that there are more disadvantages to this system rather than advantages but FPTP system can be acceptable in many ways, for example making it simple and the results are produced more quickly without confusing the voter with a long list of parties and candidates. Take the UK's democracy; it is one of the strongest in the world and since no system is perfect, it shouldn't have to go through the massive revamp of changing. ...read more.

Response to Question
The candidate gives an extensive, well developed response to the question. They concisely explain first-past-the-post, and then go on to discuss the advantages and disadvantages of FPTP in an admirable level of detail. This structure enables the ...

Response to Question
The candidate gives an extensive, well developed response to the question. They concisely explain first-past-the-post, and then go on to discuss the advantages and disadvantages of FPTP in an admirable level of detail. This structure enables the candidate to show the examiner that they understand FPTP, and allows them to introduce the debate before examining it in more detail. The essay has a somewhat pro-FPTP slant, but this enables the candidate to come down on one side of the debate, and the candidate clearly sets out many of the disadvantages of FPTP, so it isn't really a problem.

Level of Analysis
The candidate's level of analysis is excellent. The essay goes into a lot of detail and examines the arguments for and against the use of FPTP to an appropriate level. The use of lots of examples from British politics is impressive. It shows that the candidate has a very good knowledge of the subject, and that they have done research/further reading on the topic, and the references to global politics demonstrate a wide range of research and knowledge.

Quality of Writing
The candidate's quality of written communication is very good; they are able to clearly communicate their ideas and explain their points well. There are a few minor errors, such as failing to capitalise "liberal democrats" in one instance (although this appears to be a typo), but none of them are grave enough to warrant a serious loss of marks. The candidate also writes that "there is very little chance of drastic parties being elected" and while it is obvious what the candidate means from the context, I would use "extreme" or "extremist" instead, as it is a more accepted term. There is also a reference to the Conservatives as "Tories" and personally I would stick to referring to them as "the Conservative Party" or "Conservatives". It may be tiresome having to repeat yourself so much, but I believe it is better to stick to correct political terms, even though Tory is a very well known label for the Conservatives.