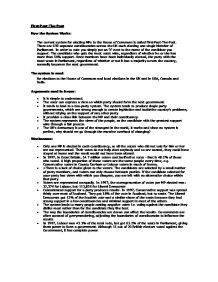 First-Past-The-Post How the System Works: The current system for electing MPs to the House of Commons is called First-Past-The-Post. There are 659 separate constituencies across the UK each electing one single Member of Parliament. In order to vote you simply put an 'X' next to the name of the candidate you support. The candidate who gets the most votes wins, regardless of whether he or she has more than 50% support. Once members have been individually elected, the party with the most seats in Parliament, regardless of whether or not it has a majority across the country, normally becomes the next government. The system is used: for elections to the House of Commons and local elections in the UK and in USA, Canada and India. Arguments used in favour: * It is simple to understand. ...read more.

* The UK's democracy is one of the strongest in the world, it works and since no system is perfect, why should we go through the massive overhaul of changing? Weaknesses: * Only one MP is elected in each constituency, so all the voters who did not vote for him or her are not represented. Their votes do not help elect anybody and so are wasted, they could have stayed at home and the result would not have been altered. * In 1997, in Great Britain, 14.7 million voters cast ineffective votes - that is 48.2% of those who voted. A high proportion of these voters are the same people every time, e.g. Conservative voters in County Durham or Labour voters in much of Surrey. * >There is a lack of choice given to the voters. ...read more.

In 1997, Conservative support was spread thinly over most of Scotland. They got 18% of the vote in Scotland, but no seats. The Liberal Democrats got 13% of the Scottish vote and a similar share of the seats because they had strong support in a few constituencies and minimal support in most of the others. * The system leads to many people casting negative votes i.e. voting against the candidate they dislike most rather than for the candidate they like best. * The way the boundaries of constituencies are drawn can affect the results. Governments are often accused of gerrymandering, adjusting the boundaries of constituencies to influence the results. * In 1997, Labour won 43.3% of the total vote, but got 65.2% of the seats in Parliament, giving them power to form a government. Although 11 out of 20 British electors voted against the Government, it has complete power. ...read more.