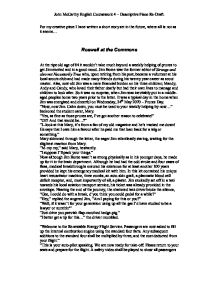 For my creative piece I have written a short story set in the future, where all is not as it seems&amp;#133; Roswell at the Commons.

For my creative piece I have written a short story set in the future, where all is not as it seems... Roswell at the Commons At the ripe old age of 84 it wouldn't take much beyond a weekly helping of prunes to get Jim excited and in a good mood. Jim Boree was the former editor of Strange and also not Necessarily True who, upon retiring from his post, became a volunteer at his local scouts club and had made many friends during his twenty year career as scout master. Alas, now old Jim was a mere financial burden on his three children; Mandy, Andy and Candy, who loved their father dearly but had their own lives to manage and children to look after. So it was no surprise, when Jim was inevitably put in a middle-aged peoples home two years prior to the letter. It was a typical day in the home when Jim was energized and cheerful on Wednesday, 24th May 2070 - Prunes Day. "Now, now Jim. Calm down, you must be used to your weekly helping by now..." beckoned the student carer, Mary. "Yes, as fine as those prunes are, I've got another reason to celebrate!" "Oh? And that would be...?" "L-look at this Mary, it's from a fan of my old magazine and he's tracked me down! ...read more.

"You're the only one I could think to trust after I discovered how crooked my associates are." Jim stepped in out of curiosity, as if this was any other type of similar situation he would have probably scurried away hurriedly. "Didn't catch your name back there...?" "Didn't throw it. My name isn't an issue but as you're so interested, call me Billy." "OK, Billy, what is it you wanted?" By now Jim had taken the assumption that Billy was either a complete weirdo or someone with a very big secret to hide. He sat himself on a nearby chair and waited in anxiety for what he was about to hear. "For years now, 69 years to be exact; I have been witness to the biggest conspiracy ever witnessed by mankind. Slowly this whole disgusting plot has been uncovered and I have had to hide myself away for fear of my life in these slums." "Everybody was paid off, everyone damned it!" "Newspapers, the monarchy, my own employees!" "Go on." "The world you see today, as we both know, is very different to the one of the past." "The new millennium they called it. A new beginning. Ha! If only everyone knew then." Jim had to intervene. "But we did know. The Antarctic melted because of Global Warming and everywhere was flooded, Britain was the only country left." ...read more.

"How can I trust you?" "You must trust me. I'm a politician!" Jim thought back to all his worries in life and his three children. The world they had grown up in had all been a sham. Their lives merely part of a huge conspiracy! Their right to drive a car abolished! Never again would they be able to climb a conker tree for fear of being sued, or listen to normal music! Nevertheless, what could he do? Slowly, and carefully Jim raised a sharp knife out of his pocket... Epilogue Unfortunately Jim's life was brought to a halt as he attacked Mr. Hague. Out of nowhere, Effion Hague grabbed Jim and William Hague delivered a fatal judo chop. William had given up all hope of overthrowing the Green Party until a new revolutionary thinker stepped in after recovering from the shock of being booted out of the cabinet. The scene was sheer chaos as one woman invaded the student hideout and locked them up in asylum detention centres forever. Anne Widecombe took her place as leader of the corrupt Tory Party and proceeded to bring the country back to normal as trees were cut down, oil powered, reliable trains and planes brought back into service, and the life expectancy cut back down to 36 with the introduction of the old hospital service. William Hague was left to rest in peace as he died two years later, shot by a new criminal Michael Portillo, who claimed his 2 million pound prize. John McCarthy English Coursework 4 - Descriptive Piece Re-Draft. ...read more.