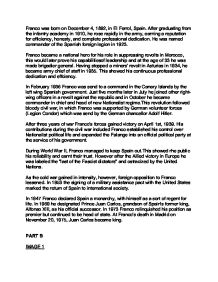 Franco was named commander of the Spanish foreign legion in 1923.

Franco was born on December 4, 1892, in El Ferrol, Spain. After graduating from the infantry academy in 1910, he rose rapidly in the army, earning a reputation for efficiency, honesty, and complete professional dedication. He was named commander of the Spanish foreign legion in 1923. Franco became a national hero for his role in suppressing revolts in Morocco, this would later prove his capabilitiesof leadership and at the age of 33 he was made brigadier general. Having stopped a miners' revolt in Asturias in 1934, he became army chief of staff in 1935. ...read more.

which was send by the German chancellor Adolf Hitler. After three years of war Franco's forces gained victory on April 1st, 1939. His contributions during the civil war included Franco established his control over Nationalist political life and expanded the Falange into an official political party at the service of his government. During World War II, Franco managed to keep Spain out.This showed rhe public his reliability and earnt their trust. However after the Allied victory in Europe he was labeled the "last of the Fascist dictators" and ostracized by the United Nations. As the cold war gained in intensity, however, foreign opposition to Franco lessened. ...read more.