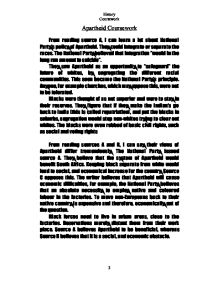 From reading source A, I can learn a lot about National Party's policy of Apartheid. They could integrate or separate the races. The National Party believed that integration &quot;would in the long run amount to suicide&quot;.

Apartheid Coursework From reading source A, I can learn a lot about National Party's policy of Apartheid. They could integrate or separate the races. The National Party believed that integration "would in the long run amount to suicide". They saw Apartheid as an opportunity to "safeguard" the future of whites, by segregating the different racial communities. This soon became the National Party's principle. Anyone, for example churches, which may oppose this, were not to be tolerated. Blacks were thought of as not superior and were to stay in their reserves. They figure that if they make the Indian's go back to India (this is called repatriation), and put the blacks in suburbs, segregation would stop non-whites trying to clear out whites. The blacks were even robbed of basic civil rights, such as social and voting rights From reading sources A and B, I can say their views of Apartheid differ tremendously. The National Party issued source A. They believe that the system of Apartheid would benefit South Africa. Keeping black separate from white would lead to social, and economical increase for the country. Source C opposes this. The writer believes that Apartheid will cause economic difficulties, for example, the National Party believes that an absolute necessity to employ native and coloured labour in the factories. ...read more.

This view challenges the view in source E. it contradicts all that was written. Source F is from a speech made by Verwoerd, speaking about the Bantu Education Act. He clearly implies that Bantus are second-class citizens and that their education should be restricted. "What is the use of teaching a Bantu child, mathematics, when it cannot use it practise? That is absurd" Verwoerd is referring to the Bantus as 'it'. This proves that Verwoerd does not see the Bantu, as individuals, but more like slaves to the country. They have no prospect of joining the affluent society, so education needn't be proper. This source supports source E, Bantustans are not beneficial for the people who live in them. Source H is from a government circular. It shows that the Bantu who live in Bantustans are those who are incapable of basic labour - the rejects. This can't be used in factories, so are dumped in Bantustans. This source supports source E. it proves that Bantustans are "The white man's garbage can" Source D is a praise of Verwoerd and Bantustans. It says that Verwoerd gave the Bantu's, "good laws" and "proper education". "Verwoerd knew that we (Bantus) ...read more.

For instance, in 1960, Robert Sobukwe (leader of the PAC - a new black group formed to gain equal rights for Pan-Africans) began a campaign. Sobukwe and his supporters marched to the police station of Orlando Township. They were immediately arrested, but this just caused a larger disturbance. A large, noisy crowd surrounded the police station. One young policeman lost hi nerve, and fired into the crowd, as did his colleagues. Sixty-nine people were murdered that day, and a further one hundred and eighty were injured. This incident is known as the 'Sharpeville Massacre. This became known, worldwide, and demands were made for Apartheid to end. During 1960's, there were various worldwide anti-Apartheid movements. For instance, sporting boycotts and also trade boycotts - which I've already mentioned. Although I have so far proved that Apartheid was unworkable, and harmful, this is not necessarily true. Although trade did decrease during 1980's, it rose from 1960, onwards. With South Africa being rich in minerals, Apartheid was the perfect time to take advantage of these resources. Using blacks for cheap labour, the government soon gained. This proves the statement wrong. It decreased when the world discovered working conditions, and refused to trade. South Africa soon became a pariah state. "Apartheid could never work and was harmful to South Africa." - This is true, to a certain degree. History Coursework 2 ...read more.