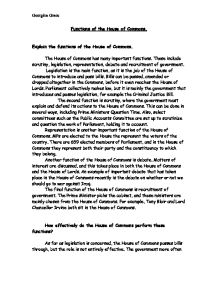 Functions of the House of Commons.

However, as select committees tend to be made up in proportion to representation in the House of Commons, the government will still have a majority in the committees designed to question and hold them to account. While most of the functions of the House of Commons are carried out to some degree, they are not all carried out effectively. MPs are under the influence of the party whips, and because of this they represent their party more than their constituents. Legislation proposed by the government gets passed because they have such a large majority, and the government can also control scrutiny as the party with the largest representation dominates select committees. In this way, the functions of the House of Commons are carried out, but not effectively. Georgina Grace ...read more.