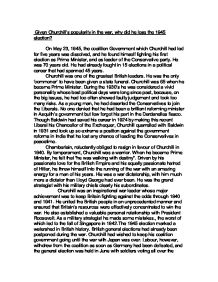 Given Churchill&amp;#146;s popularity in the war, why did he lose the 1945 election?

Given Churchill's popularity in the war, why did he lose the 1945 election? On May 23, 1945, the coalition Government which Churchill had led for five years was dissolved, and he found himself fighting his first election as Prime Minister, and as leader of the Conservative party. He was 70 years old. He had already fought in 15 elections in a political career that had spanned 45 years. Churchill was one of the greatest British leaders. He was the only 'commoner' to have been given a state funeral. Churchill was 65 when he became Prime Minister. During the 1930's he was considered a vivid personality whose best political days were long since past, because, on the big issues, he had too often showed faulty judgement and took too many risks. As a young man, he had deserted the Conservatives to join the Liberals. No one denied that he had been a brilliant reforming minister in Asquith's government but few forgot his part in the Dardanelles fiasco. Though Baldwin had saved his career in 1924 by making this recent Liberal his Chancellor of the Exchequer, Churchill quarrelled with Baldwin in 1931 and took up so extreme a position against the government reforms in India that he lost any chance of leading the Conservatives in peacetime. Chamberlain, reluctantly obliged to resign in favour of Churchill in 1940. By temperament, Churchill was a warrior. ...read more.

Churchill's overall election campaign was poor. He tried to win votes by exposing the 'evils' of socialism. From the beginning he struck hard against his opponents. Controversy ensued when he said the Socialists "would have to fall back on some form of Gestapo." His daughter Mary later recounted how her mother begged Churchill "to delete the odious and invidious reference to the Gestapo. But he would not heed her." His daughter Sarah told him that Socialism as practised in the war did no harm, and did quite a lot of people well." Churchill's views were influenced by the recently published "Road to Serfdom", written by F. A. Hayek, which argued that economic planning resulted inevitably in totalitarian government and the extinction of personal liberty. Years later Churchill told the author of the book that while his ideas were good they would never work in Britain. As historian Lord Blake has written, "To most people these threats and this language about people who till a few weeks ago had been his Cabinet colleagues seemed ludicrous." The Beveridge Report, which was introduced to review, the existing welfare provisions identified five "giants" which would have to be overcome if Britain were to rebuild as a better society. They included; want, disease, squalor, ignorance and idleness. Sir William Beveridge who was chairman of the committee suggested a number of ways in his report to slay these giants. ...read more.

People needed change. Another important factor was The Beveridge Report and the huge public attention it received. The Labour Party offered two convincing polices and believed in them unlike the Conservative Party. A factor criticising Churchill himself, was the campaign. The Conservative Party campaign was poor. Churchill tried to expose the evils of socialism, hence the Labour Party, voters didn't find this helpful. Also a factor that may have influenced voters, which has been considered more relevant in the past than I believe is necessary was the cartoon in the Daily Mirror. In my opinion, Churchill had been given the office in order to try and win the war this had been done. As Martin Gilbert states, "the electorate did not want the pre-war Conservatives back; their domestic policy seemed negative and inadequate for the needs of post-war recovery. Labour came to power to carry out a plan of social and economic reconstruction. Although hi party lost the election Churchill was re-elected as an MP. Controversy over Churchill will continue. "Despite many blunders and hasty, impetuous decisions, only one verdict is possible. He was a great war time leader", and as he said himself "Victory at all costs, victory in spite of all terror, victory however long and hard the road may be; for without victory there is no survival." However it is clear from the Labour landslide victory that the electorate regarded him as such but did not feel that he and more importantly the Conservative party could carry out the post war reform which was so urgently needed. ...read more.