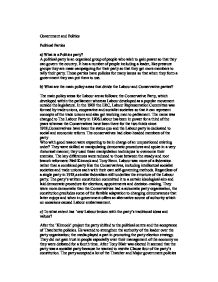 Government and Politics Political Parties a) What is a Politics party? A political party is an organised group of people who wish to gain power so that they can govern the country. It has a number of people including a leader, like pressure groups they are mass campaigning for their party so that they get more members to rally their party. These parties have policies for many issues so that when they form a government they can put them to use. b) What are the main policy areas that divide the Labour and Conservative parties? The main policy areas for Labour are as follows: the Conservative Party, which developed within the parliament whereas Labour developed as a popular movement outside the legislature. In the 1900 the LRC, Labour Representation Committee was formed by trade unions, cooperative and socialist societies so that it can represent concepts of the trade unions and also get working men to parliament. ...read more.

Regardless of a single party in 1918,a similar federalism still underlies the structure of the Labour party. The party's written constitution committed it to a certain ideological aim and laid democratic procedure for elections, appointments and decision-making. They were more democratic than the Conservatives had a autocratic party organisation, the constitution precludes some of the flexible adaptation to changing circumstances that latter enjoys and when in government offers an alternative source of authority which on occasions caused Labour embarrassment. c) To what extent has 'new Labour broken with the party's traditional ideas and values? After the 'Kinnock' project the party shifted to the political centre and the acceptance of Thatcherite policies. He wanted to strengthen the authority of the leader over the party organisation; the media played a part in promoting the party election strategy. ...read more.

What has happed in new labour is the reversal of traditional labour democracy. The trade union lost its relationship with the party because the project teams received addresses by Brown and Blair. The party discipline and self discipline were tightened, he had mad his party aware that they were New Labour and that ranks must not be broken. The OMOV system was rejected and the discredited electoral system revised. The changes are due to the social and cultural change to Britain and so if Labour were to win the next election then they had to change its policies so that it matched the people's needs too. The party came to terms with the fact that the conservative policies that were opposed are popular and so too firmly established to be ignored. This includes the privatisation measures, changing in industrial relations laws, cuts in marginal rates of direct taxation. ...read more.