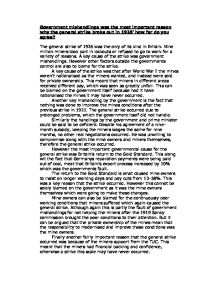 Government mishandlings was the most important reason why the general strike broke out in 1926' how far do you agree? The general strike of 1926 was the only of its kind in Britain. Nine million miners took part in lockouts or refused to go to work for a variety of reasons. A key cause of the strike was government mishandlings. However other factors outside the governments control are also to blame for the strike. A key cause of the strike was that after World War I the mines weren't nationalised as the miners wanted, and instead were sold for private ownership. This meant that miners in different areas received different pay, which was seen as greatly unfair. ...read more.

Despite his agreement of a nine-month subsidy, keeping the miners wages the same for nine months, no other real negotiations occurred. He was unwilling to compromise along with the mine owners and miners themselves, therefore the general strike occurred. However the most important governmental cause for the general strike was Britain's return to the Gold Standard. This along wit the fact that Germanys reparation payments were being paid out of coal, meat that Britain's export process increased by 10% which was the governments fault. The return to the Gold Standard is what caused mine owners to insist on longer working days and pay cuts from 13-38%. ...read more.

Finally another fairly important reason that the general strike occurred was because of the miners support from the TUC. This meant that the miners had financial backing and confidence, otherwise a strike this scale may have never occurred. To conclude, although the government mishandlings such as the gold standard, failure to help the miners after 1921's strike and failure to nationalise, were party to blame for the general strike, they are not the only cause. Mine owner's failure to improve the conditions within the mines and miners confidence after being supported by the TUC are also extremely important factors for the strikes occurrence. Therefore it was a combination of all of these events with cause the general strike to occur. ...read more.