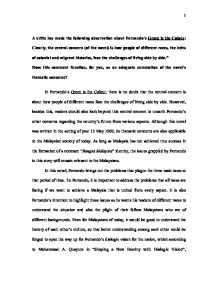 Green is the Colour: &quot;how people of different races, the heirs of colonial and migrant histories, face the challenges of living side by side.&quot; - Does this comment function, for you, as an adequate summation of the novel's thematic concerns?

A critic has made the following observation about Fernando's Green is the Colour: Clearly, the central concern (of the novel) is how people of different races, the heirs of colonial and migrant histories, face the challenges of living side by side." Does this comment function, for you, as an adequate summation of the novel's thematic concerns? In Fernando's Green is the Colour, there is no doubt that the central concern is about how people of different races face the challenges of living side by side. However, besides this, readers should also look beyond this central concern to unearth Fernando's other concerns regarding the country's future from various aspects. Although this novel was written in the setting of post 13 May 1969, its thematic concerns are also applicable to the Malaysian society of today. As long as Malaysia has not achieved true success in the formation of a common "Bangsa Malaysia" identity, the issues grappled by Fernando in this story will remain relevant to the Malaysians. In this novel, Fernando brings out the problems that plague the three main races at that period of time. To Fernando, it is important to address the problems that all races are facing if we want to achieve a Malaysia that is united from every aspect. It is also Fernando's intention to highlight these issues as he wants his readers of different races to understand the situation and also the plight of their fellow Malaysians who are of different backgrounds. Even for Malaysians of today, it would be good to understand the history of each other's culture, so that better understanding among each other could be forged to open the way up for Fernando's dialogic vision for the nation, which according to Mohammad A. Quayum in "Shaping a New Destiny with Dialogic Vision", "accommodates widely different outlooks for the sake of promoting fellowship and peace" (169). Through this novel, Fernando highlights the problems faced by the Malays at that period of time, where they are forced to confront ...read more.

Hence, there is something that the Chinese community should learn from Yun Ming - his patriotism towards the country, even during times of crisis. In contrast, Yun Ming's brother Chris represents the group of Chinese who left the country when it was in crisis, to search for better pastures broad. It is sad to say that at that period of time, instead of staying back in Malaysia to help the nation overcome the crisis, there was this group of Chinese who had this selfish tendency of escaping abroad to avoid from being embroiled in the crisis. Hence, the issue of loyalty to the country emerged and persists until today, as it is still common among the Chinese to seek permanent residency abroad as a means to escape, in case the country faces a crisis again. By highlighting the two different characters of Yun Ming and Chris, Fernando is playing on the conscience of readers who are Malaysian Chinese regarding the issue of being patriotic to the country, and leaves it to them to make their own choice. For the Indians, their problem regarding the division of caste, which is still existing today is portrayed through the life of an Indian female character, Gita. Her father's vehement objection towards her relationship with another Indian guy of a lower caste, draws the readers' attention to the fact that Indians themselves are discriminating against each other, which makes the issue of making the country united a harder task. Hence, Fernando is suggesting to the Indians that they should cast away their differences within their own race before attempting to proceed with the task of forging national unity with other races. Apart from the challenges faced by the different races, Fernando now turns his attention towards the country's challenges. Through the influential character of the crook, Panglima, Fernando is also highlighting the problem of corruption that exists in the country's political arena and in the government administrative system. ...read more.

Mohammad A. Quayum comments in "Shaping a New Destiny with Dialogic Vision": Fernando's view is that as in nature different colours and creatures co-exist, complementing one another and contributing to its beauty, serenity, and wholeness, so should we as children of nature be able to live together in society, forgetting our racial, cultural, and religious barriers, provided we retain our human condition by resisting the ideals that are dehumanizing and despiritualising (169). Besides that, through the portrayal of the rape of Siti Sara, the protagonist who can also be seen as a symbol of Malaysia, Fernando is also suggesting that after the May 13, 1969 racial riots, the nation had been badly wounded and time was needed for the nation to heal from its wounds. Therefore, the title of the book Green is the Colour is also seen as a remedy to heal the wounds of the nation, for nature has healing properties that can soothe and alleviate the pain which was inflicted on every citizen. Hence, it is hoped by Fernando that every citizen of Malaysia would emulate the elements of nature to form a better and united Malaysia. Last, but not least, the ambience of racial tensions in post 13 May 1969 serves as a reminder to all Malaysians of the price that the country had to pay for not being united. Mohammad A. Quayum describes in "Shaping a New National Destiny with Dialogic Vision" about the situation at that bleak period of time in history, "Malaysia (was) in the grip of hatred, feverish unrest, lawlessness, and disorder" (168). Therefore, it is intended of Fernando for the readers to discover the reasons for the incident through the reading of this novel, and also to ponder about the solution that was offered by him. It is Fernando's hope to see his suggestions on liberal humanist values to be practised by every Malaysian, which will thus help much in shaping a new future and destiny for the nation. ...read more.