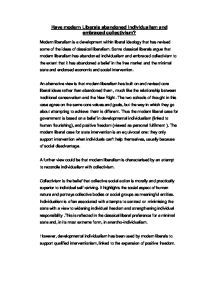 An alternative view is that modern liberalism has built on and revised core liberal ideas rather than abandoned them, much like the relationship between traditional conservatism and the New Right. The two schools of thought in this case agree on the same core values and goals, but the way in which they go about attempting to achieve them is different. Thus the modern liberal case for government is based on a belief in developmental individualism (linked to human flourishing), and positive freedom (viewed as personal fulfilment). The modern liberal case for state intervention is an equivocal one: they only support intervention when individuals can’t help themselves, usually because of social disadvantage.

A further view could be that modern liberalism is characterised by an attempt to reconcile individualism with collectivism.

Collectivism is the belief that collective social action is morally and practically superior to individual self-striving. It highlights the social aspect of human nature and portrays collective bodies or social groups as meaningful entities.

Individualism is often associated with attempts to contract or minimising the state with a view to widening individual freedom and strengthening individual responsibility .This is reflected in the classical liberal preference for a minimal state and, in its most extreme form, in anarcho-individualism.

However, developmental individualism has been used by modem liberals to support qualified interventionism, linked to the expansion of positive freedom.

Collectivism is commonly associated with pushing the state forward, the state being a mechanism through which collective energies are harnessed and collective ends achieved. This is evident in socialist support for social and economic intervention and, ultimately, state collectivisation.

However, collectivism can have anti-statist implications in that it highlights the capacity for social harmony, most clearly reflected in ideas of anarcho- collectivism.

The Classic Liberal view is that society exists for the sake of the individual. The highest purpose of the state, if there is to be a state, consists in aiding individuals to achieve their own happiness. The result of this understanding of moral philosophy is that each individual, each human being, is supremely important. Each individual should regard his or her own success in life as of supreme importance.

The above concept of Individualism fits in perfectly with Classical Liberalism. Every person is sovereign in a social and political context. The citizen in a Classical Liberal society is recognised as having a moral nature with personal authority over his or her own life. No state or government may deny individuals their natural rights to life, liberty, and the pursuit of their own happiness. The state exists for the sake of the individual and not the individual for the sake of the state.

In a way, modern liberalism can be seen as a bridge between liberalism and socialism. John Rawls developed an argument in favour of redistribution of wealth, arguing that if people were unaware of their social position, they would view an egalitarian society as “fairer” than an inegalitarian one, because the desire to avoid poverty is greater than that of attaining great riches.

Individualism does not mean that one isolates oneself from society, communities, associations, organisations, and so forth. In fact, Individualists need to join together and work together if the political philosophies of Classical Liberalism and Libertarianism are to be promoted, however Modern Liberals take this a step further in arguing that we ourselves should compensate for others misfortune.