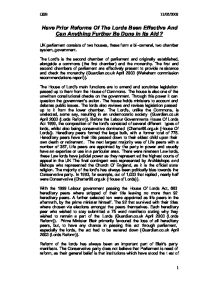 Have Prior Reforms Of The Lords Been Effective And Can Anything Further Be Done In Its Aid ?

Have Prior Reforms Of The Lords Been Effective And Can Anything Further Be Done In Its Aid ? UK parliament consists of two houses, these form a bi-cameral, two chamber system, government. The Lord's is the second chamber of parliament and originally established, alongside a commons (the first chamber) and the monarchy. The first and second chambers of parliament are effectively present to provide resistance and check the monarchy (Guardian.co.uk April 2003 (Wakeham commission recommendations report)). The House of Lord's main functions are to amend and scrutinise legislation passed up to them from the House of Commons. The house is also one of the unwritten constitutional checks on the government. Through this power it can question the government's action. The house holds ministers to account and debates public issues. The lords also reviews and revises legislation passed up to it from the lower chamber. The Lord's, unlike the Commons, is unelected, some say, resulting in an undemocratic society (Guardian.co.uk April 2003 (Lords Reform)). Before the Labour Governments House Of Lords Act 1999, the composition of the lord's consisted of several different types of lords, whilst also being conservative dominated (Charter88.org.uk (House Of Lords)). Hereditary peers formed the large bulk, with a former total of 775. Hereditary peers have their title passed down to their eldest child upon their own death or retirement. ...read more.

Lord Wakeham, from his report, has recommended that government supporter's and those who wish to have a complete overhaul of the system compromise. This is due to both parties wanting different appointment methods for members of the house. Those supporting the government believe that a fully nominated house would function better, compared to those that believe a directly elected house would function better (Lord Chancellors Department White Paper (Lords Reform, November 2001)). If the Lords were to be fully nominated it would allow for a better starting place on authority. This authority would be provided by the members themselves as they would be bringing some form of expertise to the house, their personal opinions and beliefs would also figure predominately, again, if membership were to be nominated as well as there apparently being no dominate party in the reformed house, it would lead to fairer politically unbiased discussions views being put forth. However, a fully elected upper chamber would also have its disadvantages, first, at the moment the lords members are not full time, however, with a fully elected chamber the possibility of a full time political career would become apparent, individual knowledge and expertise may also be lost within an elected lords. Finally, comments regarding the disappearance of individuals and cross-benchers have come to light in regards to an elected house (Lord Chancellors Department White Paper (Lords Reform, November 2001)). ...read more.

Taking these ideas into account, membership should consist of around 550 - 600. This will compose of 120 non partisan members who should be appointed by the aforementioned check of a Statutory Appointments Commission, a further 120 will be elected directly, 16 bishops to represent the state religion, a minimum of 12 law lords to bring a judicial element of knowledge and, finally, no more than 332 nominated members who may/will be party affiliated, and if so, their number will mirror their strength. In conclusion, I believe that the existing administration is working hard to find a solution to the current status of the lords, whether they are doing this to benefit themselves and their own party is a different question. The reforms so far, I believe, have been effective on the surface, below however, the same issues continue to arise but on a smaller scale. After the House Of Lords Act 1999, the upper chamber still does not constitute a representative or democratic institution. Those peers that have been elected to stay, however, show that the reforms have been partially effective by claiming legitimacy and, although the conservatives still have a majority in the house, it has been reduced. Peers are also more likely to challenge the government due to this increased 'legitimacy', this it can be said enables the Lords to work more effectively. ...read more.