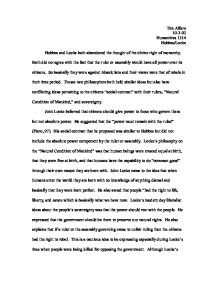 Hobbes and Locke both abandoned the thought of the divine right of monarchy.

Tim Alfaro 10-3-02 Humanities 1314 Hobbes/Locke Hobbes and Locke both abandoned the thought of the divine right of monarchy. Both did not agree with the fact that the ruler or assembly would have all power over its citizens. So basically they were against Absolutism and their views were that of rebels in their time period. Theses two philosophers both held similar ideas but also have conflicting ideas pertaining to the citizens "social contract" with their rulers, "Natural Condition of Mankind," and sovereignty. John Locke believed that citizens should give power to those who govern them but not absolute power. He suggested that the "power must remain with the ruled" (Fiero, 97). His social contract that he proposed was similar to Hobbes but did not include the absolute power component by the ruler or assembly. ...read more.

This is a cautious idea to be expressing especially during Locke's time when people were being killed for opposing the government. Although Locke's ideas we mostly speaking good about humans and their well being, Hobbes' ideas were dissimilar. Thomas Hobbes' believed that the social contract of the government and the people was that citizens should let themselves be ruled and that the ruler or assembly should have "ultimate authority." He argues that if there was no government then humans would be out of control and ultimately perish. He also stressed that government was "society's only hope for peace and security" (Fiero 98). Hobbes' ideas about the "Natural Condition of Mankind" was that humans were "selfish, greedy, and war-like" (Fiero 98). This shows that Hobbes' believed that humans needed government in order to live and flourish. ...read more.

In the novel, it also explains that a social contract is not broken between ruler and the ruled. Crusoe is an Englishman who is basically the ruler to Friday, the Spaniard, and Friday's father. This contract was made when Crusoe saved their lives so they give some of their freedom to Crusoe and Crusoe give them their own freedom by allowing them to reside on the island with the rest of the Spaniards. So to reiterate, Crusoe's way of ruling or being the dominant figure was lenient and he gave them their own choice and their own thought. The religion he taught Friday was also a way of ruling over him; this gave Friday basic principles and also taught him to know God and how he was according to Crusoe. Both Hobbes and Locke can relate to Crusoe but I believe that Locke's ideas of life, liberty, and estate is reiterated in the novel. ...read more.