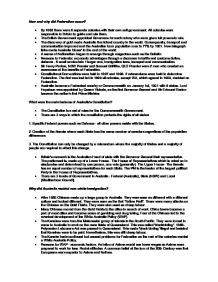 How and why did Federation occur?

How and why did Federation occur? * By 1865 there were 6 separate colonies with their own self-government. All colonies were responsible to Britain to guide and rule them. * The British Government appointed Governors for each colony who were given full powers to rule. * The discovery of gold made Australia the richest country in the world. Consequently, transport and communication improved and the Australian born population rose to 77% by 1901. New telegraph links made Australia 'closer' to the rest of the world. * A sense of Nationalism began to emerge through magazines such as the Bulletin * Reasons to Federate: economic advantages through a decrease in tariffs and customs duties, defence - 6 small armies into 1 larger one, Immigration laws, transport and communication. * Sir Henry Parkes, NSW Premier and Samuel Griffiths, QLD Premier were 2 men who created an awareness of the benefits of Federation. * Constitutional Conventions were held in 1897 and 1898. 2 referendums were held to determine Federation. The first was lost but in 1899 all colonies, except WA, which agreed in 1900, decided on Federation. * Australia became a Federated country or Commonwealth on January 1st, 1901 with 6 states. Lord Hopetoun was appointed by Queen Victoria, as the first Governor General and Sir Edmund Barton became the nation's first Prime Minister. What were the main features of Australia's Constitution? * The Constitution is a set of rules for the Commonwealth Government. * There are 3 ways in which the constitution protects the rights of all states: 1. Specific Federal powers such as Defence - all other powers reside with the States. 2. Creation of the Senate where each State has the same number of senators regardless of the population differences. 3. The Constitution can only be changed by a referendum where the majority of States and a majority of people are required to effect this change. ...read more.

Wealthy classes enjoyed social visits, clubs, and theatre attendance. Most had one or two domestic servants to assist with household work. A Workingman's Paradise? * This was a common view of Australia in the first decade of the 20th century, mainly because skilled workers were well paid and had good conditions compared with those in Britain, Europe and America. * Trade unions had campaigned successfully for an 8-hour working day for skilled workers, though most unskilled workers worked in excess of 60 hours per week. * Factory legislation to regulate conditions and work practices existed though, in many factories, employers ignored the legislative requirements. * In 1904 the Conciliation and Arbitration Commission was established to settle disagreements between workers and bosses. Trade union memberships (skilled trades) steadily increased in this decade. * In 1907 the Harvester Decision established a principle of a minimum wage (basic wage) for a male unskilled worker (approx. $4.20 per week) * Important welfare reforms of this period included the introduction of Commonwealth old age and invalid pensions (1908) and limited workers compensation for Federal government employees (1912). Maternity allowances were also introduced. This legislation did place Australia ahead of many other nations in the area of social justice. Women's Place * Despite receiving the right to vote in 1902, there was still great inequality between men and women in this decade. Marriage was an economic necessity for many women and married women depended on their husbands for economic survival and well-being. Women generally had to give up jobs when they married, although many working class women continued to work to allow their families to survive. * In the clothing trades, many women worked for very low wages and for hours approaching 90 per week. * Domestic servants were primarily women who often worked 14-hour days in return for their board, left over food and a tiny wage. Which groups in Australian society could not vote around 1901? ...read more.

The US sent troops to support South Vietnam. This war eventually escalated with no real victors (The North would eventually win control in 1975). * Lyndon Johnson was the US President throughout the mid 60's and Richard Nixon was the President from 1968 to 1974. At first Australians supported our entry into the war, but as TV showed the war horror every night and young conscripts were sent to fight, a protest movement against the war began. This began with the Save our Sons movement which opposed the war. * The Moratorium movement began in 1966 with the support of the opposition Labor Party. This movement wanted Australia to withdraw from Vietnam and to abolish conscription. Huge rallies occurred in major cities around Australia. Finally, Australia did withdraw and Conscription was abolished in 1972. The Vietnam War divided Australia. Older generations believed in the war whereas, younger generations, generally, were against it and conscription. Soldiers who went to Vietnam were seen as unpopular, which was completely different from their fathers who returned from the Second World War. How did the attitude and role of women and men in Australian society change? * In the 1950's, despite the effort made by women during the war, women and men had very traditional roles. Men were the breadwinners and worked whereas women were the child bearers and homemakers. If a woman went out to work they received a lower wage than men. (About 75% for the same work). * During the 50's and 60's a social, revolution occurred which saw the traditional roles of men and women change. Women began to challenge these roles in work, sport, the Arts and in Parliament * Better educational opportunities allowed women to take advantage of more highly skilled and paid jobs. * Between 1962 and 1969 women gradually received the same pay as men through Government legislation. * The Women's movement began in the US and was known as Women's liberation and worked through Direct Action and protesting. The first National Women's Liberation Conference was held in May 1970. ...read more.