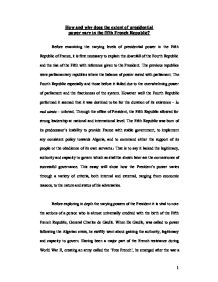 How and why does the extent of presidential power vary in the fifth French Republic?

How and why does the extent of presidential power vary in the fifth French Republic? Before examining the varying levels of presidential power in the Fifth Republic of France, it is first necessary to explain the downfall of the Fourth Republic and the rise of the Fifth with reference given to the President. The previous republics were parliamentary republics where the balance of power rested with parliament. The Fourth Republic especially and those before it failed due to the overwhelming power of parliament and the fractioness of the system. However well the Fourth Republic performed it seemed that it was destined to be for the duration of its existence - la mal aim�e - unloved. Through the office of President, the Fifth Republic allowed for strong leadership at national and international level. The Fifth Republic was born of its predecessor's inability to provide France with stable government, to implement any consistent policy towards Algeria, and to command either the support of its people or the obedience of its own servants.1 That is to say it lacked the legitimacy, authority and capacity to govern which as shall be shown later are the cornerstones of successful governance. This essay will show how the President's power varies through a variety of criteria, both internal and external, ranging from economic reasons, to the nature and status of his adversaries. Before exploring in depth the varying powers of the President it is vital to note the actions of a person who is almost universally credited with the birth of the Fifth French Republic, General Charles de Gaulle. ...read more.

In the following legislative elections of March 1986, the PS, the presidential party, was defeated at the hands of the right - wing RPR-UDF coalition. This inaugurated a constitutionally unprecedented period of cohabitation between a Socialist President and a right wing parliamentary majority in the National Assembly.5 It was at this time that Jacques Chirac, the leader of the largest party in the Assembly was appointed Prime Minister, a period of cohabitation had begun. Chirac made it clear he had a democratic mandate to govern. Would Presidential power, for so long the dominant characteristic in French politics, be severely undermined? It seems that although French politicians dislike cohabitation, the French themselves clearly endorse it. They voted for it in three of the last five national elections as a means to counterbalance the president's extensive powers.6 Although it can be viewed as a healthy form of checks and balances, measures have been introduced to try and reduce the chances of further cohabitation. This has been done through a bipartisan reform in 2000 which reduced the presidential term from seven to five years, the same as the National Assembly, and synchronised the voting dates. The theory was that voters would not be so perverse as to elect a new President and one month later, hand a parliamentary majority to his opponents.7. Therefore it can be shown that a President's power varies according to the composition of the Parliament. ...read more.

Giscard was not always so fortunate, he faced a far less favourable economic situation than his predecessors: the first oil shock ended the West's long post-war boom right at the end of the Pompidou presidency. Like other Western leaders, Giscard first failed to get the measure of the crisis and then paid a heavy price for the unpopular economic measures he finally took. His defeat was paralleled by Callaghan's in Britain in 1979; Jimmy Carter's in the United States in 1980; and Helmut Schmidt's in Germany in 1982. 11 Most Western leaders derive their power from the constitution of the respective state. The case of France is somewhat different due to a rather unique type of dual executive. This essay has shown how there are a variety of factors, which determine the extent of the power of the President in the Fifth Republic of France varying from internal to external influences on power, from the constitution and cohabitation, to the nature and status of his adversaries to the economy. These can all be effectively grouped together under the headings of legitimacy, authority and capacity which are the three components that can either give the President power, or remove their power if they are not existent, and therefore explain the reasoning behind how and why the extent of presidential power in Fifth French Republic varies. (Word count: 1,965 words) 10 A. ...read more.