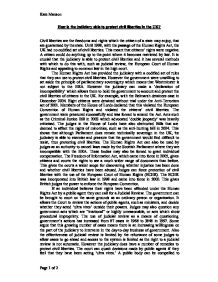 how can the judiciary protect human rights?

Judges may also question any government acts which are "irrational" or highly unreasonable, or acts which show procedural impropriety. The use of judicial review as a means of questioning government's actions has increased from 87 cases in 1968 to 3848 in 1997. Some argue that this growing number of cases means there is an increasing willingness on the part of the judiciary to intervene in the day-to-day business of government. Also the effectiveness of judicial review is limited by the reluctance of some judges to allow cases to go ahead and access to the system is limited as the right to a judicial review is not automatic. However the judiciary does have a number of remedies to protect civil liberties. The court can quash decisions made by public agents if they feel that they have been acting 'ultra vires.' A public body can be compelled to perform a specified function by law and any public body can be ordered not to carry out or to stop carrying out an action that the court decides is unlawful. A claimant for judicial review may also seek an injunction, a declaration or damages. In this way the judiciary has a number of methods to protect civil liberties that are disputed by judicial reviews. ...read more.