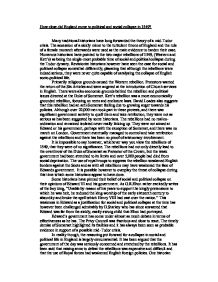 How close did England come to political and social collapse in 1549?

How close did England come to political and social collapse in 1549? Many traditional historians have long forwarded the theory of a mid-Tudor crisis. The accession of a sickly minor to the turbulent throne of England and the rule of a female monarch afterwards were used as the main evidence to harden their case. Numerous historians have pointed to the two major rebellions of 1549, (Western and Kett's) as being the single-most probable time of social and political collapse during the Tudor dynasty. Revisionist historians however have seen the case for social and political collapse somewhat differently, placating that although the rebellions were indeed serious, they were never quite capable of catalysing the collapse of English socio-political life. Primarily religious grounds caused the Western rebellion. Protestors wanted the return of the Six Articles and were angered at the introduction of Church services in English. ...read more.

The use of royal troops to suppress the rebellion weakened English borders against the Scots and as with all rebellions may have weakened the face of Edwards government. It is possible however to overplay the threat of collapse during this time which some historians appear to have done. Some historians have pinned their belief of social and political collapse on their opinions of Edward VI and his government. As G.R.Elton rather excitedly writes of the boy king, "Unable by reason of his years to support the kingly pretensions to which he was heir, he reduced the king-worship of the early sixteenth century to absurdity and broke the spell which Henry VIII had cast over the nation." This weakness in Edward as a justification for social and political collapse at the time has however been challenged admirably by D.Starkey who has since answered that Edward was far from the sickly, easily swung child that Elton had portrayed. ...read more.