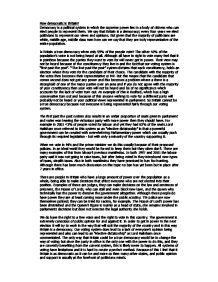 How democratic is Britain?

How democratic is Britain? Democracy is a political system in which the supreme power lies in a body of citizens who can elect people to represent them. We say that Britain is a democracy; every four years we elect politicians to represent our views and opinions. But given that the majority of politicians are white, middle age, middle class men how can we say that they are truly representative of the entire population. Is Britain a true democracy when only 59% of the people vote? The other 40% of the population's voice is not being heard at all. Although all have to right to vote many feel that it is pointless because the parties they want to vote for will never get in power. Their view may not be heard because of the constituency they live in and the fact that our voting system is "first past the post". ...read more.

For example in 2001 43% of people voted for labour and yet they had 63% of the seats. Lord Hailsham once referred to this system as an "elective dictatorship" in that a powerful government can be created with overwhelming Parliamentary power which can usually push through its required legislation - but with only a minority of the country supporting it. When we vote in MPs and the prime minister we do this usually because of their proposed policies. In an ideal world they would be forced to keep them but they often don't. There are many examples of this from labour's previous manifestos. In both 1997 and 2001 the labour party said it was not going to raise taxes, but after being voted in they introduced new types of taxes, stealth taxes. Also in both manifestos they have promised to ban fox hunting. Although there has been much discussion on this topic no ban has yet been but in place after 7 years in office. ...read more.

The government is extremely conscious of public opinion for and against it. In order to get in power in the next election it will try to work in the way that will suit the majority of the country and in this way Britain is a democracy. Our voting system does lead to a lack of everyone's opinion being represented and also can lead to an "elective dictatorship" as Lord Halisham once commentated. The only way that Britain could be a true democracy would be to change the way of voting but since the party in office is the only one with the power to do this, and they are currently benefiting from the current system, this is likely never to happen. All systems of voting have limitations and it is hard to create a perfect method. Because of this I feel that it Britain is as democratic as it can be and more so then many other states, and public opinion and support is usually at the forefront of politicians minds. ...read more.