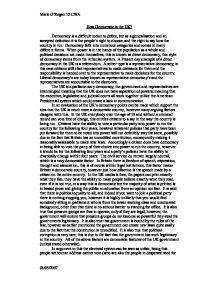 How Democratic is the UK?

How Democratic is the UK? Democracy is a difficult notion to define, but as a generalisation and an accepted definition it is the people's right to choose, and the right to say how the country is run. Democracy falls into numerous categories and comes in many different forms. When power is in the hands of the population as a whole and political decisions are made themselves, this is known as direct democracy, this style of democracy stems from the Athenian system. A Present day example of a direct democracy in the UK is a referendum. Another type is a representative democracy; in this case citizens will elect representatives to make decisions for them and the responsibility is handed over to the representative to make decisions for the country. Liberal democracy's are today known as representative democracy's and the representatives are accountable to the electorate. The UK is a parliamentary democracy, the government and representatives are intermingled meaning that the UK does not have separation of powers, meaning that the executive, legislative and judicial courts all work together unlike the American Presidential system which could create a lack in communication. ...read more.

however it is highly unlikely that you would find somebody sitting in parliament who is from the lower working class and uneducated background, other than that there is no serious barrier to standing for office. It is also true that pressure groups are free to operate, only if they are legal, however, the government will ensure that pressure groups do not become so powerful they steal the governments legitimacy. It is also true that government is bound by the rules of the law, however as earlier mentioned the government can create new laws quite easily due to the fact that the constitution is uncodified. It is also true that political corruption is very rare; this is due to the fact that the government has such legitimacy in the country. All of the above factors are democratic features of the UK government (unless stated otherwise). In argument to this the electoral system can be seen as unfair, being that people without an address cannot vote (who are also the people in desperate need for help), this does make the votes unequal. ...read more.

It is true that the UK has many different parties to vote for, giving the citizens options and policies to prefer, however this choice only happens once every 4 years. Pluralist Britain is a democratic country, however its democratic factors are limiting. It is true we have freedom of speech; it is true we can vote (over 18 and not criminal, not including homeless), there are no serious barriers to standing for office. Britain is a democratic country when comparing our state at present in the world however I feel the undemocratic factors outweigh the democratic factors. There are few controls on the PMs extensive powers of patronage, we do not have a codified bill of rights and considerable power lies in the hands of the unelected. A major undemocratic factor which I feel is very important, is that we are not at all well informed of our countries situations, we are only told what they want us to be told, there is a considerable amount of information that is kept from the citizens, even if it is for our own benefits it still creates an air of great secrecy. Marie O'Regan 12 CWA 08/05/2007 ...read more.