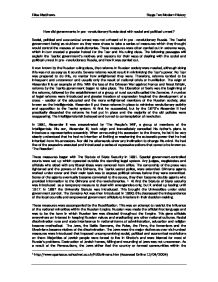 How did governments in pre - revolutionary Russia deal with social and political unrest?

How did governments in pre - revolutionary Russia deal with social and political unrest? Social, political and economical unrest was not unheard of in pre - revolutionary Russia. The Tsarist government being as stubborn as they were chose to take a series of measures which they thought would control the masses of revolutionaries. These measures were often carried out in extreme ways, which in-turn created a greater hatred for the Tsar and his ruling class. The following passages will explain the Tsarist government's motives and reasons for their ways of dealing with the social and political unrest in pre - revolutionary Russia, and how it was carried out. It was known by the Russian ruling class, that reforms in Russian society were needed, although doing this was not as easy as it sounds. Severe reforms would result in minimising the Tsar's power. No Tsar was prepared to do this, no matter how enlightened they were. Therefore, reforms tended to be infrequent and uncommon and usually only the result of national crisis or humiliation. The reign of Alexander II is an example of this. With the loss of the Crimean War against France and Great Britain, reforms by the Tsarits government began to take place. The Liberation of Serfs was the beginning of the reforms, followed by the establishment of a group of rural councils called the Zemstva. ...read more.

The Jews who left the country took with them a strong hatred for the Tsarist system and the ones that stayed became a part of the various revolutionary movements. In this instance, the Russian ruling class could be seen as extremely foolish. At a time when solidarity and unity were essential for the development of the Tsarist system, they opted to carry out cruel and inhumane procedures against half of its population. "At no previous time have the religious persecutions been so frequent and so cruel as they are today. In all the cities and industrial centres, soldiers are employed and equipped with live ammunition to be sent out against the people." - Nicolai Tolstoy's 'Open address to Nicholas II', 1902. 2 As Russia experienced major demographic increase, poverty levels became high and therefore productivity of the land went down. This poverty also rose as a result of the peasants being driven off their own land. A huge decline in agricultural prices meant that fewer people were able to work on the land and as a result also joined the poverty line. The high taxes on peasantry in Russia were similar to the taxes on peasantry in pre- revolutionary France. these people were the worst off, yet they were they people made to pay the taxes. ...read more.

" Autocracy is a superannuated form of government that may suit the needs of a Central African tribe, but not those of the rest of the world. That is why it is impossible to maintain this form of government except by violence." - Nicolai Tolstoy's 'Open address to Nicholas II', 1902. 3 The eventual fall of Nicholas II in 1917, could be seen as a result of poor leadership rather than savage oppression. Events such as Nicholas II's decision to take over personal command of the Russian armed forces, court scandals or his wife's German nationality were major factors in the fall of the Dynasty but were not sufficient enough to bring it down on their own. The short sightedness of the Russian Ruling class proved to be the main reason for the downfall of the Tsarist reign. Fear of the Tsar's power being decreased, measures were taken to stop any kind of revolutionary activity occurring. The dissatisfaction amongst the members of the middle and lower classes was the cause of the social and political unrest. But, the dissatisfaction was caused by the measures taken by the Tsarist government in order to obtain traditional Tsarist policies. Hence, the ongoing circle began that the Russians then found themselves entrapped in for years to come. Even after the fall of the Romanov Dynasty, Russia could still not find a balance within the classes, a problem that they would face for many years. ...read more.