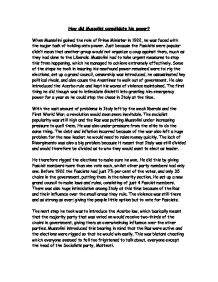 How did Mussolini consolidate his power?

How did Mussolini consolidate his power? When Mussolini gained the role of Prime Minister in 1922, he was faced with the major task of holding onto power. Just because the Fascists were popular didn't mean that another group would not organize a coup against them, much as they had done to the Liberals. Mussolini had to take urgent measures to stop this from happening, which he managed to achieve extremely effectively. Some of the steps he took in insuring his newfound power remained were to; rig the elections, set up a grand council, censorship was introduced, he assassinated key political rivals, and also cause the Avantines to walk out of government. He also introduced the Acerbo rule and kept his waves of violence maintained. The first thing he did though was to intimidate Gioletti into granting him emergency power for a year so he could stop the chaos in Italy at the time. With the vast amount of problems in Italy left by the weak liberals and the First World War, a revolution would soon seem inevitable. ...read more.

There was also huge intimidation among Italy at this time because of the Ras and their influence over the small areas they rule. The violence was still there and as strong as ever; giving the people little option but to vote for Fascists. The next step he took was to introduce the Acerbo law, which basically meant that the majority party that was voted on would receive two-thirds of the chairs in government, giving them an overwhelming influence over the other parties. Mussolini introduced this bearing in mind that the Ras were active and the elections were rigged so that he would win easily. This was blatant cheating which everyone seemed to fell too frightened to talk about, everyone except the head of the Socialists party, Matteoti. Matteoti prepared a 30 minute speech to say at the next government meeting. The continued interruptions from the Fascists meant that it actually lasted 2 hours. Matteoti knew that this would cost him his life and started going around with a police escort who, despite being anti-socialist, would not harm him or give him to Mussolini because of his importance. ...read more.

The Avantine was basically all of the politicians that were not part of the Fascist group walked out of the government in protest to the poor handling of the Matteoti affair. This was what Mussolini was hoping for, and it meant that the Fascists had full power of government and left the other politicians looking rather stupid standing outside waiting to be invited again. Having full power meant that Mussolini could pass any act he wanted, and he soon passed the act abolishing all other parties in Italy, giving the Fascists supreme power. The censorship law was soon passed also, meaning that all documents had to pass Fascist approval first, and everything that was approved was pro-Fascist or anti-socialist. Mussolini not only kept his power, but he strengthened it, This was an incredible feat considering he had no previous political experience of leading and the state Italy was left in when he came to power. The main step in consolidating his power in my opinion was when he rigged the elections and introduced the Acerbo law together. This made the basis for his other laws and rules that he passed. ...read more.