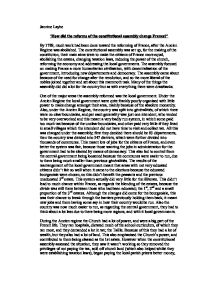 How did the reforms of the constitutional assembly change France?

Jannine Layhe 'How did the reforms of the constitutional assembly change France?' By 1789, much work had been done toward the reforming of France, after the Ancien Regime was abolished. The constitutional assembly was set up, for the making of the constitution, their main aims were to make the citizens of France more equal, abolishing the estates, changing taxation laws, reducing the power of the church, reforming the economy and addressing the local governments. The assembly focused on making France a more humanitarian civilisation, with decentralisation of the government, introducing new d�partements and democracy. The assembly came about because of the need for change after the revolution, and so the more liberal of the nobles joined together and set about this mammoth task. Many of the things the assembly did did a lot for the country but as with everything there were drawbacks. One of the major areas the assembly reformed was the local government. Under the Ancien Regime the local government were quite frankly poorly organised with little power to make change amongst their area, mainly because of the absolute monarchy. Also, under the Ancien Regime, the country was split into g�n�raliti�s, of which there were no clear boundaries, and per each generality was just one intendent, who tended to be ...read more.

Also they decided that priests and bishops had to be elected by the local communities. Another issue they tried to combat was absenteeism, of which they declared that a man of the cloth could not have more than 15 days absent a year, because the government were paying them now to do a job. However the Assembly enforced a signing of an oath to the Church, which caused a huge split throughout the country. The oath basically meant the Church agreed to the changes France was making to the Church. However some priests signed the oath early and it took a while for the Pope to get back to whether he agreed to it or not, when he did get back to them he decided that he didn't and this caused the rift between those who had signed and those who hadn't. Those who did sign were seen to be going against the church, which is where it was felt their loyalty should be, and obviously the villagers of the parish priests who had signed agreed with their priest. This changed France because it meant it was much less religion focused and the Church's power was slipping, as well as the rift because of the oath that had been signed by some. ...read more.

They got rid of torture and as a means to make their society more humane, by introducing the guillotine, which was supposed to be the most humane form of capital punishment at that time. The new system proved itself by reducing the number of crimes dramatically which obviously changed France for the better making it a nicer place to live, especially Paris. The new judiciary made a huge impact in France and stuck for longest, it made France a fairer more equal place to live. Overall France had changed quite drastically, and it was better for some than others for example, the bourgeoisie benefited most because they had the money to buy church land and such, and they were the ones who benefited from the national banking system. They also didn't have the main burden of tax paying, as didn't the poorer people. The nobility and clergy who had benefited before didn't have the same privileges and rights, which made France a fairer place to live for the under classes, but this didn't mean the old upper estates were too pleased. The oath that was signed by half the clergy and the sacking of many of the admin in the church didn't please the French orthodox either, and especially not Rome, when the clergy were asked to remain a part of France and not Rome. ...read more.