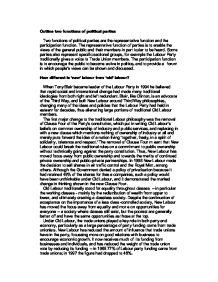 Outline two functions of political parties Two functions of political parties are the representative function and the participation function. The representative function of parties is to enable the views of the general public and their members in particular to be heard. Some parties also represent specific sectional groups, for example the Labour Party traditionally gives a voice to Trade Union members. The participation function is to encourage the public to become active in politics, and to provide a forum in which people's views can be shown and discussed. How different is 'new' labour from 'old' labour? When Tony Blair became leader of the Labour Party in 1994 he believed that rapid social and international change had made many traditional ideologies from both right and left redundant. Blair, like Clinton, is an advocate of the Third Way, and built New Labour around Third Way philosophies, changing many of the ideas and policies that the Labour Party had held in esteem for decades, thus alienating large portions of traditional Old Labour members. ...read more.

Although the Government denied a policy of privatisation because it had retained 49% of the shares for these companies, such a policy would have been unthinkable under Old Labour, and it demonstrated the marked change in thinking shown in the new Clause Four. Old Labour traditionally stood for equality throughout classes - in particular the working classes - mainly by the redistribution of wealth from upper to lower, and ultimately creating a classless society. Despite the continuation of acceptance on the importance of a less class-controlled society, New Labour has moved the focus away from equality and more on opportunities for everyone - a society where classes still exist, but the poorest are generally better off and have the same opportunities as those at the top. Under Old Labour, the trade unions played a key role in both party and economy, particularly as a large percentage of party funding came from trade unionists. ...read more.

There has been a definite ideological shift in the policies of New Labour. However, there have always been clashes in the Labour Party, particularly between those who want to transform the state (democratic socialists) and those who do not expect to change the nature of society but want to give the majority a fairer deal (social democrats). New Labour contains elements of both, but is generally an extension of social democracy, and therefore is largely consistent with strands of socialism which have always been present within the Labour party. Those with these beliefs, such as Tony Blair, would traditionally be in the minority in the party and therefore would not be able to win power. However, Tony Blair has tailored his policies into a Third Way philosophy, and in doing so has managed to appeal to a greater spread of the electorate than the Labour Party has ever before, while still maintaining core, fundamental socialist beliefs. ...read more.