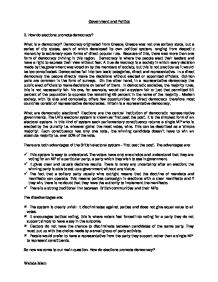 How do elections promote democracy?

Government and Politics 2. How do elections promote democracy? What is a democracy? Democracy originated from Greece, Greece was not one solitary state, but a series of city states, each of which developed its own political system, ranging from despotic monarchy to extremely open forms of direct popular rule. Because of this, there was more than one form of democracy thriving in this region. Democracy is where the people elect their leaders and have a right to express their view without fear. A true democracy is a society in which every decision made by the government was voted on by the members of society, but this is not practical as it would be too complicated. Democracies fall into two basic categories, direct and representative. In a direct democracy the people directly make the decisions without elected or appointed officials. ...read more.

This can be described as a 'simple majority'. Each constituency has only one vote, the winning candidate doesn't have to win an absolute majority i.e. over 50% of the vote. There are both advantages of the British electoral system- 'first past the post'. The advantages are: * This system is easy to understand. The voters have only one choice and understand that they are voting for an MP of a particular party, a party which they wish to see in government. * It gives clear and usually decisive results. There is rarely any uncertainty after an election; the winning party is able to set up a government without any hiatus. * The fact that a solitary party usually wins outright means that the doctrine of mandate and manifesto can operate. This means parties campaign in elections with a clear manifesto and if they win, there is no doubt that they have the authority to implement the manifesto. ...read more.

The ability to conduct free and fair elections is at the core of what it means to call a society democratic. In a democratic society, the publics opinion is viewed as important, in an election the official who is appointed is only appointed because in the publics opinion he/she is suitable. This way the government knows what the general public think. This is one way that elections promote democracy. The purpose of elections: * To select a government that we want * To get people's view across * To select representative * Symbol of our democracy * Allows participation * People have real power - satisfaction * Accountability * Educating * Recruiting 'an elite' All the above purposes promote democracy in a way. Our electoral system provides a strong and stable government. This is because the government does what the public want, nobody complains against the, and due to this the government becomes stable and strong, which is another way in which elections promote democracy. Wahida Islam ...read more.