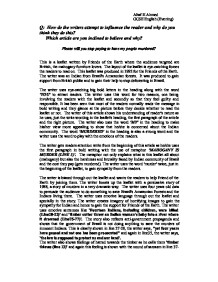 How do the writers attempt to influence the reader and why do you think they do this? Which article are you inclined to believe and why?

Q: How do the writers attempt to influence the reader and why do you think they do this? Which article are you inclined to believe and why? Please will you stop paying to have my people murdered? This is a leaflet written by Friends of the Earth where the audience targeted are British, the mahogany furniture lovers. The layout of the leaflet is eye-catching forces the readers to read on. This leaflet was produced in 1992 for the Friends of the Earth. The writer was an Indian from Brazil's Amazonian forests. It was produced to gain support from British public and to gain their help to stop deforesting in Brazil. The writer uses eye-catching big bold letters in the heading along with the word 'YOU' to attract readers. The writer uses this word for two reasons, one being involving the readers with the leaflet and secondly so that they feel guilty and responsible. It has been seen that most of the readers normally reads the message in bold writing and they glance at the picture before they decide whether to read the leaflet or not. The writer of this article shows his understanding of reader's nature as he uses, just the write wording in the leaflet's heading, the first paragraph of the article and the right picture. The writer also uses the word 'MY' in the heading to make his/her view more appealing to show that he/she is concerned about the Indian community. ...read more.

The Friends of the Earth article must have convinced a lot of British readers to write to local MP's and other government authorities and our government must have pressurised the Brazilian government to provide the reasons. The writer uses a bold heading with a question, 'what is happening to the rainforest resource?' This helps the writer to get reader's attention towards the article, especially the readers, who wants to know about the government's point of view regarding deforestation. In the beginning of the article, the writer keeps the pace of writing slow and tries to build up relationship with the readers. The writer creates this friendly environment by showing that the Brazilian government appreciate the reader's concerns for deforestation and shows that they are also on the same side of the court. The writer initially writes the things what the reader wants to read. For example, the writers says, 'the Amazon's rainforest is a vast natural resource. It could provide timber and a wide variety of plants, food crops and medicines (line1-14)' and then again he/she says, 'the forest also has an important effect on the world's weather. It is also home to hundreds of thousands of unique wildlife species (line15-18)'. The writer also uses a picture to show the government is doing everything possible to keep the rainforests and putting its efforts towards forest regeneration. Unlike the first leaflet where the writer plays with emotions to win reader's hearts, the writer here plays with the reader's mind by showing that they are also on their side. ...read more.

At the time of reading the first article, I was inclined towards the first article but when I read the second article my views started changing. I am not saying that the incident of 1988 shown in the first article where 14 people were killed is not true but I think the writer over exaggerated the whole incident, as there is no evidence shown to prove its authenticity. I believe, no Government would allow the illegal exports of their precious things when the Government know that this can earn them some foreign exchange, which can be used towards the development of their country and their nation. I also believe that the forests are necessary for a good environment but at the same time the population is increasing and they need homes, food and off course roads to commute to one place to another. In short I am inclined towards the second article and I agree that the Brazilian government would be taking all the necessary steps to prevent any incidents and also taking precautions to prevent their precious mahogany from any illegal wood traders and trying their best to give protection to innocent. In addition, the second article placed a greater emphasis on facts and figures from reputable agencies that are more likely to be believed although the data is outdated and there is likely to be some bias in favour of the government. Clearly the first article, which is more emotive, is strongly biased towards the interest of Friends of the Earth. Altaf H Ahmed GCSE English (Evening) ...read more.