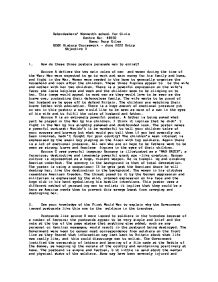 How do these three posters persuade men to enlist?

Haberdashers' Monmouth school for Girls Centre No: 68350 Name: Rory Giles GCSE History Coursework - June 2000 Entry Objective 3 1. How do these three posters persuade men to enlist? Source A defines the two main roles of men and women during the time of the War; Men were expected to go to work and earn money for his family and home, and fight in the War. Women were needed in the home to generally organise the household and look after the children. These three figures appear to be the wife and mother with her two children. There is a powerful expression on the wife's face; she looks helpless and weak and the children seem to be clinging on to her. This image would appeal to most men as they would love to be seen as the brave one, protecting their defenceless family. The wife wants to be proud of her husband as he goes off to defend Britain. The children are watching their brave father with admiration. There is a huge amount of emotional pressure put on men in this poster; a man would like to be seen as more of a man in the eyes of his wife and to fulfil the roles of husband and father. Source B is an extremely powerful poster. A father is being asked what part he played in the War by his children. I think it implies that he didn't fight in the War by his slightly ashamed and dumbfounded look. The poster makes a powerful contrast: Wouldn't it be wonderful to tell your children tales of your success and bravery but what would you tell them if you had cowardly not been involved, hadn't fought for your country? ...read more.

morale and posititvity up back home There is no doubt that the first day had been a complete disaster for the British, with many thousands of casualties. This is not a reliable source. 4. These two sources were written long after the war was over. How reliable are they as evidence of what it was like on the Western Front? Use the sources and your own knowledge of the First World War to explain your answer. Source I by BA Steward is a primary piece of evidence. It is reliable because it is factual and plays down the glamorised, patriotic view many people had. He states this forcefully and I can sense some bitterness towards the glamour and bravado portrayed in many sources. He describes the merciless shooting of German soldiers by two, young British soldiers; this is evidence that the War made young men find death and killing routine and free of emotion. Both men are key witnesses; B.A. Steward was sent over after the heavy bombardment to capture High Wood. B.A. Steward's account is unique from many others because he describes his own emotions; he was frightened and wanted to get away from High Wood as quickly as he could to protect himself: 'What I now had in my mind was to go as quickly as possible in the opposite direction, as soon as possible. Leaving the dugout I ran for it.' B.A.Steward wrote his memoirs over sixty years later. This emphasises the strength in which his experiences are imprinted in his mind. This is a reliable source. Source K is a primary source. Sassoon was a key witness as he was an infantry officer at the time. ...read more.

Source E demonstrates how serious censorship could have mislead the British public. The lack of information may have led relatives to believe that their loved ones were safe and healthy when this was often not the case. This is evidence to support the interpretation. Source F clearly implies that the first day of the Battle of the Somme had been a success for the British. This is a highly misleading cartoon because the information is very inaccurate; the first day had been a complete disaster for the British. This is particularly misleading because the public did not doubt the information's reliability, because it was printed in a reliable source, a newspaper. Again this indicates the control the Government had over the press. Source G encourages misunderstanding; the poem portrays life on the Western Front as heroic, gallant and courageous. Again this poem was printed in the national press and people presumed this to contain reliable information. This source is not as blatantly misleading as source F, however there is some, but not total, intention to deceive. Source I provides a clear indication that the soldiers thought the Government were misleading the British people. Source J is not directly intentionally misleading because the cigarette manufacturer had to use a type of advertising that the British Government would approve of. Source K does not directly imply that the government were misleading but in comparison to source E it is clear that the government were concealing vital information from the public. Most of the sources indicate that the government were misleading the people but some are more obvious than others. Sources E, F and G are clearly intending to deceive. Sources A, B and J are not as blatantly misleading but they have subtle implications of the benefits of enlisting for the War and life on the Western front. ...read more.