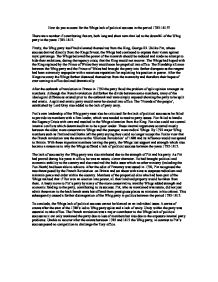 How do you account for the Whigs lack of political success in the period 1783-1815? There are a number if contributing factors, both long and short term that led to the downfall of the Whig party in the years 1783-1815. Firstly, the Whig party itself had alienated themselves from the King, George III. Unlike Pitt, whose success derived directly from the Kings favour, the Whigs had continued to express their views against royal patronage. The Whigs believed the power of the monarch should be reduced and made no attempt to hide their ambitions, during the regency crisis, that the King would not recover. The Whigs had hoped with the King replaced by the Prince of Wales they would soon be propelled into office. The friendship alliance between the Whig party and the Prince of Wales had brought the party into further disrepute as the reagent had been extremely unpopular with a notorious reputation for exploiting his position in power. ...read more.

Fox failed to handle the Regency Crisis with care and resulted in the Whigs alienation from the King. Fox also could not control internal conflicts which determined him to be a poor leader. These internal arguments occurred mostly between the older, more conservative Whigs and the younger, more radical Whigs. By 1792 major Whig members such as Portland and Burke left the party saying they could no longer accept the Foxite view that the French revolution was the same as the 'Glorious Revolution' of 1688 and its influence would not spread to Britain. With these important members leaving the party, the Whigs lost support and strength which also became a reason as to why the Whigs suffered a lack of political success between the years 1792-1815. The lack of success by the Whig party was also attributed due to the strength of Pitt and his party. ...read more.

Pitt, who as mentioned was astute, did not just admit these men to the back bench seats but offered them prestigious places as ministers in his cabinet. This subsequently caused a further disintegration of the Whig party in politics between the period 1783-1815. To conclude, the Whigs lack of political success cannot be blamed on an individual issue. A series of events after the start of the 1780's led to Whig party splits and a lack of unity. Unity within the party was essential to take office. The French revolution was a major contributor to the Whigs lack of political success as it ont only weakened the party due to loss of members but also due to the exposure internal party problems. Unable to recover after the events between 1783 and 1815 the Whig party, in contrast to Pitt's success posed no competition to challenge the Tory office. ?? ?? ?? ?? ...read more.