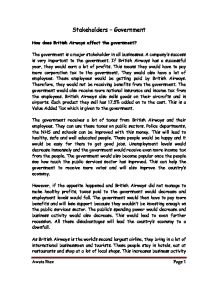 How does British Airways affect the government?

British Airways has a lot of employees and customers coming from and going to airports. This is the reason why the government built a new lane on the M25. However, the customers and employees use their cars a lot and this increases pollution levels. This is why the government persuades people to use public transport and a lot of people do use public transport now. This means that they are helping companies that run trains and buses to earn higher profits. This in return increases taxes paid to the government and the public services sector benefits once again. How are British Airways affected by the government? The government often has to step in to help companies make some important decisions. This is why they had to stop all airlines from flying at unsociable times in order to keep local communities happy. British Airways was also affected by this decision because the number of flights they have per day had to be decreased. The government has also done their best in order to ensure that British Airways does not have more than 10 landings or takeoffs from a single airport during the hours of 4 and 4.30am. ...read more.