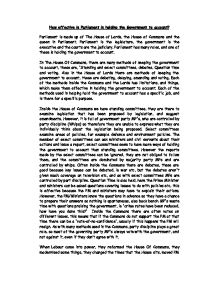 How effective is Parliament in holding the Government to account?

Question Time is also held, here the Prime Minister and ministers can be asked questions covering issues to do with policies etc, this is effective because the PM and ministers may have to explain their actions. However, the PM/Ministers know the questions in advance so they have a chance to prepare their answers so nothing is spontaneous, also back bench MP's waste time with questions praising the government, ie 'crime rates have been reduced, how have you done this?' Inside the Commons there are often votes on different issues, this means that if the Commons do not support the PM at that time there can be a 'vote-of-no-confidence', usually if this happens the PM will resign. As with many methods used in the Commons, party discipline plays a great role, so most of the governing party MP's always vote with the government, and not against it, even if they don't agree with it. ...read more.

When Labour came into power in 1997 as well as reforming the Commons they reformed the Lords as well. The Lords had become incredibly undemocratic, unrepresentative. Labour limited the hereditary peers to 92, and increased the amount of life peers. Overall, I think that Parliament is partially effective in holding the government to account, but there are three big limitations on parliamentary power, the government has a majority so therefore it can push through whatever legislation's' etc that it wants. The MP's etc sitting in parliament might just be in interested in furthering their own careers, and not actually pay attention to what's really happening. Also the Lord's can not prevent what the government does because of conventions past, Parliament Act, Threat of reform, and the Salisbury Convention stops the Lords. The government holds a lot of power over parliament, if the government really wants to do something, ie pass a legislation or act etc there is little that Parliament can do to stop it, unless there is a 'vote-of-no-confidence'. ...read more.