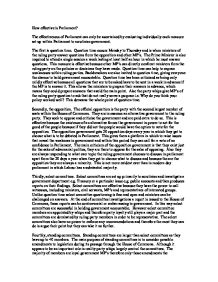 How effective is Parliament? The effectiveness of Parliament can only be ascertained by evaluating individually each measure set up within Parliament to scrutinise government.

How effective is Parliament? The effectiveness of Parliament can only be ascertained by evaluating individually each measure set up within Parliament to scrutinise government. The first is question time. Question time occurs Monday to Thursday and is when ministers of the ruling party answer questions from the opposition and other MP's. The Prime Minister is also required to attend a single session a week lasting at least half an hour in which he must answer questions. This measure is effective because other MP's can directly confront ministers from the ruling party on the policies or decisions they have made. Question time can help to expose weaknesses within ruling parties. Backbenchers are also invited to question time, giving everyone the chance to hold government accountable. Question time has been criticised as being only mildly effective because all questions that are to be asked have to be sent in a week in advance if the MP is to answer it. ...read more.

This gives them a platform in which to raise issues that reveal the weakness in government and within this period they can call for a vote of no confidence in Parliament. The main criticism of the opposition government is that they exist just for the sake of adversarial politics, they are there to oppose for the sake of opposing. Also they are always responding to what ever topic the ruling government chooses to discuss in parliament apart from the 20 days a year when they get to choose what to discuss and because the are the opposition they are always a minority. This is not more evident ever than in modern day parliament in which Labour has a substantial majority. Thirdly, select committees. Select committees are set up primarily to scrutinise and investigate a government department e.g. Treasury or a particular issue e.g. public accounts and then produces reports on their findings. ...read more.

The majority of members are loyal government MP's therefore only those amendments the government approves of are likely to be adopted. Standing committees are important in that proposed legislation has to be tidied up, clarified and modified. However standing committees lack independence and all their proposals must be approved by the whole House of Commons at the report stage of a Bill. A new committee is created for each Bill and MP's treat them more like chores rather than honours. And finally, debates. Debates are when Parliament discusses government policy, key issues, constituency issues etc. These are effective because they give anyone who wishes to do a chance to criticise government and to introduce new views and to expose government weakness. They are also a chance for backbenchers to criticise government. Debates are lacking because the ruling party chooses what to discuss and unless the government have a small majority they are ineffective. Debates are another example of adversarial politics, pointless arguing with a very low turnout anyway. In conclusion Parliament is effective in a numerous number of ways but each of them is faltered. ...read more.