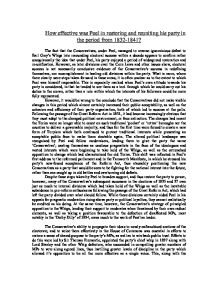 How effective was Peel in restoring and reuniting his party in the period from 1832-1841? The fact that the Conservatives, under Peel, managed to reverse ignominious defeat to Earl Grey's Whigs into resounding electoral success within a decade appears to confirm rather unequivocally the idea that under Peel, his party enjoyed a period of widespread restoration and re-unification. However, as later divisions over the Corn Laws and other issues show, electoral success is not necessarily conclusive evidence of the Conservative's success in redefining themselves, nor accomplishment in healing old divisions within the party. What is more, where there clearly were steps taken forward in these areas, it is often unclear as to the extent to which Peel was himself responsible. This is especially marked when Peel's own attitude towards his party is considered, in that he tended to see them as a tool through which he could carry out his duties to the crown, rather than a role within which the interests of his followers could be more fully represented. However, it would be wrong to the conclude that the Conservatives did not make visible changes in this period which almost certainly increased their public acceptability, as well as the cohesion and efficiency of their party organization, both of which led to success at the polls. ...read more.

While these divisions certainly aided Peel in his appeals for pragmatic moderation rising above party or political loyalties, they cannot realistically be credited as his doing. At the same time, however, the Conservative's strategy of principled opposition to the Whigs, lending their support to moderates when threatened by their own radical elements, as well as taking a position favourable to the defection of disaffected MPs, most notably in the 'Derby Dilly' of 1834, owes much to the work of Pee/l as leader. The Conservative's ability to propagate their ideas to newly-enfranchised sections of the electorate, and to voice them effectively in the House of Commons was essential in efforts to restore a sense of shared purpose to the party's MPs, as well as to win back public trust. Efforts to do this were led by Sir Thomas Fremantle, appointed the party's chief whip in 1837 along with Lord Stanley and the other Whig defectors, who succeeded in compelling greater numbers of MPs to vote along agreed lines, thus instilling greater levels of discipline in the party which allowed it's opposition to be all the more effective as a single voice. ...read more.

By 1841, the Conservatives enjoyed electoral success, overturning a ruling party at the ballot box for the first time in British history. While this is thanks in no small part to the efforts and leadership of Peel in transforming perceptions of the party, and taking an approach which allowed it to capitalise on Whig discord while maintaining Peel's own principles of pragmatism and cautious reform, such changes were to a large extent superficial. The 1841 election, and Peel's efforts did indeed bring electoral success around a newly energized and well-organized party, hower, the Conservatives' core support continued to be drawn from the counties and small boroughs as it always had been, on a platform of traditional values such as public order and agriculture. While Peel succeeded in uniting and restoring his party to enough of an extent that they were able to reclaim power, what he clearly did not do, nor perhaps attempted to do, was to significantly alter the underlying fabric of the party, nor its motivations or support. This ensured that while enough changes took place to bring the Conservatives back into government, Peel's efforts did not go far enough to ensure the long-term sustainability or unity of the party beyond that point. ...read more.