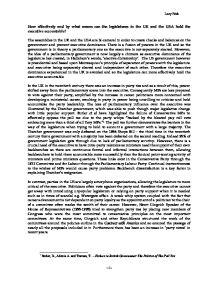 How effectively and by what means can the legislatures in the UK and the USA hold the executive accountable?

How effectively and by what means can the legislatures in the UK and the USA hold the executive accountable? The assemblies in the UK and the USA are bi-cameral in order to create checks and balances on the government and prevent executive dominance. There is a fusion of powers in the UK and so the government is in theory a parliamentary one as the executive is not separately elected. However, the idea of a parliamentary government is now largely a chimera as executive dominance of the legislature has created, in Hailsham's words, 'elective dictatorship'. The US government however is presidential and based upon Montesquieu's principle of separation of powers with the legislature and executive being separately elected and independent of each other. ...read more.

Butler et al have highlighted the failure of Conservative MPs to effectively oppose the poll tax due to the party whips "backed by the bloated pay roll vote embracing more than a third of all Tory MPs."1 The poll tax further demonstrates the barriers in the way of the legislature when trying to hold to account a government with a large majority. The Thatcher government was only defeated on the 1986 Shops Bill - the third time in the twentieth century that a government with a majority has been defeated on the second reading. Indeed 95% of government legislation gets through due to lack of parliamentary scrutiny. ...read more.

Watergate affair. A weak whip system coupled with the fact that career advancement is not dependent on party loyalty as the appointment of a politician to the chair of a committee often marks the zenith of their career. However, Newt Gingrich Speaker of the House of Representatives (1995-1998) tried to strengthen party ties by placing new members of Congress who were the most committed to conservative principles on the most important committees. At the same time, Gingrich and other Republicans structured the work of the committees around the policies outline in the Contract with America and so ensured the passage of nearly all the proposals included in it. Furthermore there has been an increase in 'party votes' in recent years. 1 Butler, D., Adonis A. and Travers, T. - Failure in British Government: The Politics of The Poll Tax Lucy Frith ~1~ ...read more.