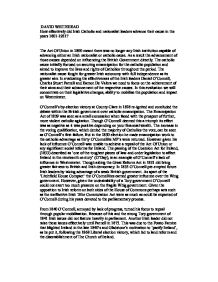 DAVID WHITEHEAD How effectively did Irish Catholic and nationalist leaders advance their cause in the years 1801-1921? The Act Of Union in 1800 meant there was no longer any Irish institution capable of advancing either an Irish nationalist or catholic cause. As a result the advancement of those causes depended on influencing the British Government directly. The catholic cause initially focused on securing emancipation for the catholic population and aimed to improve the lives and rights of Catholics throughout the period. The nationalist cause fought for greater Irish autonomy with full independence as its greater aim. In evaluating the effectiveness of the Irish leaders Daniel O'Connell, Charles Stuart Parnell and Eamon De Valera we need to focus on the achievement of their aims and their advancement of the respective causes. In this evaluation we will concentrate on their legislative changes, ability to mobilise the population and impact on Westminster. O'Connell's by-election victory at County Clare in 1828 re-ignited and concluded the debate within the British government over catholic emancipation. The Emancipation Act of 1829 was seen as a small concession when faced with the prospect of further, more violent catholic agitation. Though O'Connell deemed this a triumph its effect was as negative as it was positive depending on your financial wealth. ...read more.

The 1918 general strike that ended any suggestion of conscription for Ireland demonstrates De Valera's power. His complete rejection of British rule was complete when the Dail Eireann was established as a fully functioning national government. The descruction of the 1920 Government of Ireland Act was the single greatest impact on British Legislation made by an Irish Leader during the period. Adelman and Pearce believe De Valera made the act 'virtually a dead letter' in the south. This is certainly true as the extent of Sinn Fein's victory in the new parliament's elections was only matched by their complete rejection of the parliament itself. De Valera had put himself firmly in control of Irish governance. Though not supported by De Valera The Anglo-Irish Treaty existed to end the war that he had been an integral part of. His belief, and that of others at the time and since, that it did not sufficiently advance the nationalist cause can be questioned. It can be seen as a significant achievement given the IRA's inability to continue the Anglo-Irish War. It was unrealistic to expect an Ireland to be delivered without partition as the concern and influence of Ulster Protestants was too great. ...read more.

The virtual removal of the Anglican Ascendancy, increase in tenant's rights and the dominion status of southern Ireland are great improvements on the 1801 situation. It can be argued that O'Connell and Parnell cannot be considered nationalists in the same way as De Valera due to his radical tactics and pace of progress. But the context in which he acted (following the British reaction to The Easter Rising and The First World War, which weakened the British Army) was favourable. Given Peel's reaction to O'Connell's planned Clontarf meeting shows that direct action would not have been effective at this time. Also I do not feel the Irish people would have engaged in as much violence if the constitutional route had not been explored or there had not been the successes of The Land War. Where O'Connell faced the greatest opposition and De Valera enjoyed the greatest success I feel Parnell wasted his opportunity. The advancement of the catholic cause through Liberal and Conservative legislation showed their willingness. Parnell could have used his position in 1885 to help create a series of bills that could have greatly advanced the catholic cause. The catholic cause advanced gradually but the nationalist advances were kick-started by Parnell and delivered effectively by De Valera. David Whitehead WORD COUNT: 2006 ...read more.