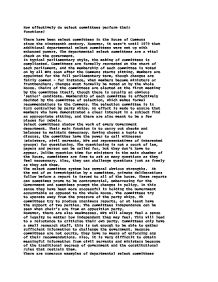 How effectively do select committees perform their functions?

for questioning. The questioning is not a court of law, papers and person can be called for, but they don't have to appear. Unlike question time for ministers in the main chamber of the House, committees are free to ask as many questions as they feel neccessary. Also, they can challenge questions just as freely as they ask them. The select committee system has several obvious strengths. At the end of an investigation by a committee, private deliberations follow before a report is issued to all of the house. These reports can sometimes prove to be controversial, embarrasing for the Government and sometimes prompt the changes in policy. ...read more.

There are numerous examples of departmental select committees making an impact. In the recent past, Mrs Dunwoody made determined attacks on both the management of Railtrack and government plans for the privatisation of the air traffic control system. Mr Anderson hit the headlines with a devastating report into the arms-to-Africa affair. Further back, in the 1992-97 parliament, Tory Quentin Davies gave then minister David Willetts a notorious grilling over his attempts to rig another committee's inquiry, which ultimately led to the latter's resignation as paymaster general. Also, from non-departmental select committees, the Public Accounts Committee issued a report in 1994 leading to a major investigation into civil service procedures. These examples show that the select committees do perform their functions very effectively. ...read more.