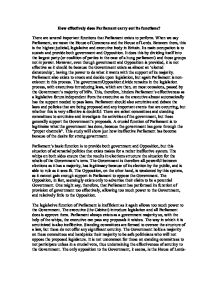 How effectively does Parliament carry out its functions?

How effectively does Parliament carry out its functions? There are several important functions that Parliament exists to perform. When we say Parliament, we mean the House of Commons and the House of Lords. Between them, this is the highest judicial, legislative and executive body in Britain. Its main occupation is to sustain and provide both government and Opposition. It does this by dividing itself into the largest party (or coalition of parties in the case of a hung parliament) and those groups not in power. However, even though government and Opposition is provided, it is not effective as it should be because the Government exists as almost an 'elected dictatorship', having the power to do what it wants with the support of its majority. Parliament also exists to create and decide upon legislation, but again Parliament is non-existent in this process. The government/Opposition divide remains in the legislation process, with executives introducing laws, which are then, on most occasions, passed by the Government's majority of MPs. ...read more.

The Opposition, on the other hand, is weakened by this system, as it cannot gain enough support in Parliament to oppose the Government. The Opposition, in fact, seemingly exists only to advertise their claim to be a potential Government. One might say, therefore, that Parliament has performed its function of provision of government too effectively, allowing too much power to the Government, and relatively little to the Opposition. The legislative function of Parliament is inefficient as it again allows too much power to the Government. The executive (the Cabinet) introduce legislation and all Parliament does is approve them. Parliament always exists as a government majority so, with the help of the whips, the executive can pass any proposals it wishes. The way in which it is scrutinized is also ineffective. Standing committees are formed to oversee the structure of a law, but these do not offer any significant scrutiny. The Government holds a majority on these committees and handpicks their majority to be safe politicians who will not oppose the proposed legislature. ...read more.

the time, but more likely it would have uncovered politically damaging information about some ministers They remain relatively ineffective; though still the most effective scrutineers of governmental activity. To conclude, it would have to be said that Parliament is monumentally flawed, and that almost, if not, all its functions are ineffective in some way. The adversarial manner in which it divides itself between government and Opposition makes co-operation difficult and hands the Government "elected dictatorship" almost on a plate. As a legislative body, Parliament does not exist. As the Government already holds a majority in Parliament, there is nothing to stop the executive's proposed laws from being passed. Also, the implementation and scrutiny of these laws is impeded by the fact that a government majority exists in both select and standing committees, thus reducing their effectiveness significantly. Changes in the House of Lords will reduce the scrutiny and legislative process even further, with "Tony's cronies" coming into the House of Lords to create an effectively dictatorial situation in British politics, with any opposition to the Labour party itself very unlikely for some time. ...read more.