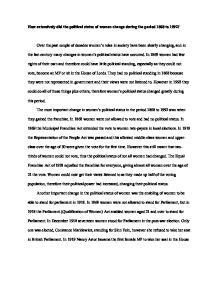 How extensively did the political status of women change during the period 1868 to 1992?

At that point, however, hereditary peeresses were still not allowed to take their seats in the House of Lords, but in 1963 an Act was passed allowing peeresses to take their seats. Also the first woman leader of the House of Lords, Baroness Young, came in to power in 1981. Before 1958 women did not have representatives in the House of Lords and could not take an active role in that side of politics but after 1958 this changed and the political status of women changed and they became more politically powerful. As women were now allowed to become MPs it naturally followed that they would later become both Cabinet Ministers and Prime Ministers, and when this happened it increased women's political status. The most powerful men in the country in 1868 were the Cabinet Ministers and the Prime Minister, and although women were allowed to be employed in these positions after 1918 it was another eleven years before a female Cabinet minister was elected; Margaret Bondfield in 1929, and another sixty-one years before the first female Prime Minister came into power; Margaret Thatcher in 1979 (although she had been party leader since 1975). ...read more.

By 1992 women had the same rights as men over their property and had equal power and status to men in society. However although legally women had more rights in 1992 that they did in 1868 women's political status had not changed directly due to this, but was more of a by-product of women gaining more wealth and power during this period. Also women gaining power and wealth changed the position of women politically. In conclusion women have gained more political power during the period 1868 to 1992 therefore changing their political status greatly. Women in 1992 had a important role in politics, which women in 1868 did not have. However women in 1992 were still not equal with men, there were still only 60 female MPs, which is just 9% and in 1997 there only 18% of MPs were women. Also in many work places women still do not have complete equality with men, as often employers are biased, but this often depends on the type of job. The gap of equality has shrunk greatly since 1868 though and women's political status has been greatly developed. ...read more.